The deal announced over the weekend by the campaigns of John Kasich and Ted Cruz employs the same theoretical concepts that are known to computer scientists, economists —even poker players — as game theory.

Game theory scholar William Poundstone describes the concept this way: “When people have conflicting motives. What should they do in various difficult situations?”

In the difficult situation at hand, trying to derail frontrunner Donald Trump’s path to the Republican nomination, the Cruz and Kasich camps agreed to divvy up three upcoming state primary contests. They plan to not compete with each other in a last-ditch effort to deny Trump the delegate count he needs to win the nomination outright and force an open convention where Kasich and Cruz might stand a better chance of securing the nomination for themselves.

Up until now, the Kasich and Cruz campaigns have divided the anti-Trump vote, because they both campaigned as the anti-Trump candidate. By competing with each other, they have actually hurt their chances by clearing the way for Trump to accumulate victories.

Poundstone said this is known in game theory as a “prisoner’s dilemma,” which, coincidentally, is also the title of Poundstone’s book.

The dilemma goes something like this: If two criminals are caught, they face two conflicting interests. One is for each to confess before the other does. Concurrently, and paradoxically, it is also in each person’s interest that they both keep quiet, to give both the best chance of getting away with their crime.

“In a prisoner’s dilemma, you really don’t want to be the one who does the cooperative thing when everyone else doesn’t,” Poundstone said.

The agreement to cooperate is the two sides’ attempt to get out of their prisoner’s dilemma and toward accomplishing a common goal. This concept also has a name.

Poundstone, on the other hand, said the agreement is similar to another aspect of game theory entitled “the stag hunt.”

“A stag hunt is really named after the idea of medieval stag hunting, where you have a group of hunters, and no one could hunt a stag on their own. It’s something where you have to cooperate with other hunters,” said Poundstone. “In that situation, there is really this incentive for people to cooperate, and that’s what I think you’re seeing between Kasich and Cruz.”

The deal between the two has Kasich agreeing to refrain from campaigning in the Indiana primary, giving Cruz a chance to unify the anti-Trump vote there. Similarly, Cruz agreed to not campaign in New Mexico and Oregon, leaving those states open to Kasich.

The ultimate goal is to prevent Trump from adding more delegates to his pile.

“By agreeing to cooperate, they end up in a situation where they can both benefit,” Zollman said.

Of course, some might argue this should have happened a long time ago.

“This is something that should have started with Kasich and Rubio on the day of the winner-take-all primaries in Florida and Ohio,” said Roger Myerson, an economics professor at the University of Chicago, who refined a game theory element known as the Nash equilibrium concept.

Yes, it’s named after John Nash, the subject of the film “A Beautiful Mind.” The concept appears in the film in what experts say is an incomplete depiction. Still, it helps explain the game theory idea of cooperation rather than competition in support of a joint end goal.

You can see the portion of the film where this concept is depicted in the clip below. 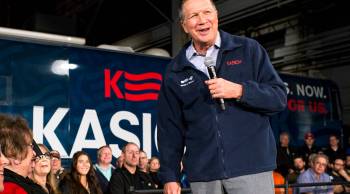 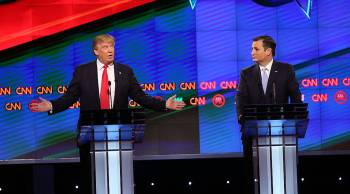