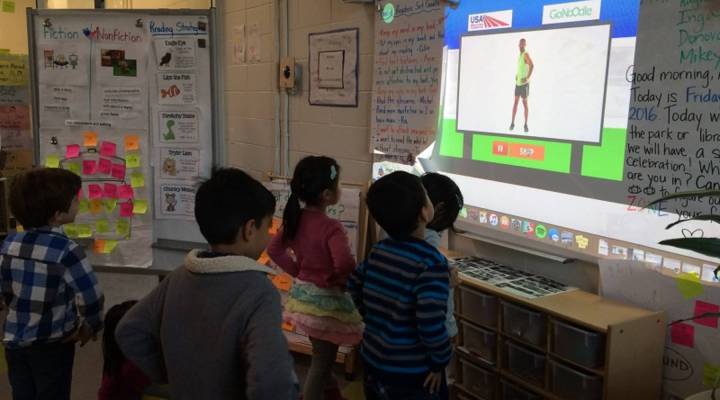 Throughout  the northern Californian cities that make up Silicon Valley, there are neighborhoods that are home to the extremely wealthy sitting right near neighborhoods of deep poverty: Mansions next to homeless encampments, and tree-filled, open green spaces next to chain-linked, densely packed housing tracts.

And according to new research, this divide is being felt acutely by the region’s four year-olds. On the one hand you find wonderful, high-quality preschools in abundance, yet as the Urban Institute’s new report illustrates, they abut neighborhoods where four year-olds have little or no access to early education.

To get a sense of what it’s like to be a preschooler in Silicon Valley, I took a tour of two very different communities. I started in Palo Alto, home to some of the hottest new start-ups that are making loads of money. Houses here sell for $2.5 million on average, and parents have lots of childcare choices.

At the AltSchool,  preschoolers start the day with mindfulness. It’s the “Transitional Kindergarten” (TK) class in a school that currently goes up to 7th grade.

AltSchool dubs itself “School, reimagined,” and proposes to be a working laboratory of what teaching and learning could look like. Learning is student-lead and inquiry based. There are comfy couches where kids can retreat to, or spontaneously brainstorm together. Plenty of post-it notes adorn the walls denoting everything from students’ future goals to story plots.

There’s Savvy technology use in the TK classroom: think morning exercise with a cool basket baller beamed in via internet and lap top and displayed on a big screen.

And just like good startup culture, TK teacher Jen Aguilar models that it’s ok to fail. “Oh goodness… Oh wow.  I made two mistakes this morning,” she said. The preschoolers happily correct her.

Chris Bezsylko is the Head of School at AltSchool, Palo Alto. He says the school looks like the offices of a startup because in many ways the school is one. “The startup culture and mentality is really about how do we give students autonomy and choice, so they can see themselves as active agents and active doers in the process, not just consumers of an education,” he said.

Innovation abounds at AltSchool. Parent Cindy Jett Stolp loves the app that keeps her updated on her preschooler’s progress. “In our smart phones, there’s a little icon that’s a parent portal,” she said. Each student has their own account and teachers post updates on a student’s progress throughout the day so parents can keep up.

After a recent field trip, Jett Stolp said she saw what her son learned.  “They would show us some of the things Mikey took pictures of and his observations.”

This model impressed Mark Zuckerberg and other venture capitalists so much that they gave the school $100 million last year. Preschool tuition is about $27,000 a year at Palo Alto’s AltSchool campus. These, you might say, are the lucky kids. The four-year-old “haves.”

Right next door is East Palo Alto, home to the not so lucky four year-olds, according to Gina Adams of the Urban Institute.   “Our study looked at preschool participation in Silicon Valley, and we found that even in a place of great wealth and innovation like Silicon Valley, you still find significant proportions of low income kids who are not participating in preschool.”

Betsy Nikolchev of the Family Engagement Institute at Foothill College has seen this preschool divide first hand. “As we head just across the 101 freeway we enter East Palo Alto, and it’s literally two different worlds,” she said.

As an early childhood expert, Nikolchev has spent a lot of time in preschools here. In East Palo Alto there are about 3,000 kids under age five, and only about 500 places available in licensed childcare. Much of that care is in home-based family childcare facilities. There are only four center-based preschools in East Palo Alto, compared to 55 in Palo Alto.

When there is no licensed care available, parents or their neighbors often watch little ones, Nikolchev said. One of the few preschools in East Palo Alto is a child development center on the Brentwood Elementary school campus. The lucky kids might get a seat here.

Outside this preschool I meet 4-year-old Jesus and his family. This aspiring helicopter pilot is lucky to have a seat here, said his mother, Inez Alcala. His older sister missed out on preschool because there just was nothing available.

This immigrant mother from Mexico has heard about the preschools across the freeway in Palo Alto. “But they are so far away, and I don’t have a car. It would be too hard to walk there with my two small kids,” she said.

And there’s also the cost. Alcala’s husband picks up construction jobs where he can, and the family of four survives on what he brings in. They live in one room of a four-bedroom apartment that they share with three other families.

The Urban Institute report found that many barriers, like transportation issues, and even language, can hinder immigrant families from accessing quality childcare, according to Gina Adams. “Very importantly does the program actually meet their needs?” she asked. “For example many of the programs are part day. If you’re a full time working parent that can be hard.”

There is some good news for little ones in East Palo Alto. Mark Zuckerberg and his wife Priscilla Chan are funding a new school here set to open in August. There will be free infant and toddler care as well as preschool. And maybe some of the bells and whistles from the other side of the 101.