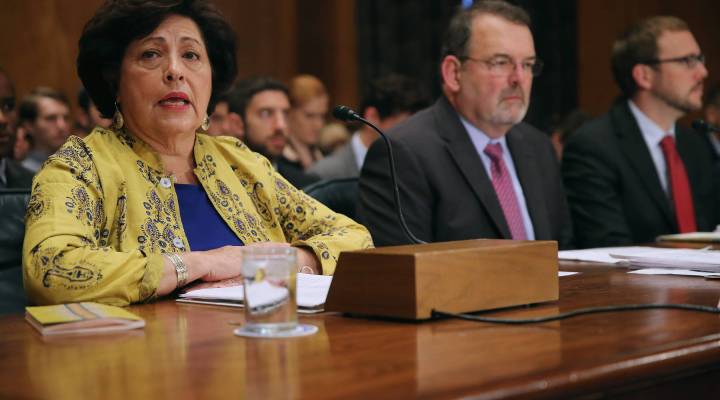 Could those OPM hacks lead to security updates?

COPY
Office of Personnel Management Director Katherine Archuleta resigned after the hack. She testified before the Senate Homeland Security and Governmental Affairs Committee about the OPM data breach in June, above. Chip Somodevilla/Getty Images

Could those OPM hacks lead to security updates?

Office of Personnel Management Director Katherine Archuleta resigned after the hack. She testified before the Senate Homeland Security and Governmental Affairs Committee about the OPM data breach in June, above. Chip Somodevilla/Getty Images
Listen Now

The recent cyber-attacks on the Office of Personnel Management left the personal information of 22 million people vulnerable to hackers. Kara Scannell of the Financial Times says,

A lot of the agencies don’t quite hit that bar. They don’t have strong password requirements, they don’t patch their software vulnerabilities, which is a major way that hackers get into systems. And then once inside they don’t’ have their network segregated. So it seems as though if you get in once you can run around the network, versus having to go through additional hoops and other back doors.

Scannell explains that the federal government is behind when it comes to security precautions.

Security improvements could be approaching though, because among the millions of people hacked were some of the very lawmakers and officials that have the power to make room in the budget for security enhancements. “There’s a sense of outrage that’s starting to take shape, because I don’t think people really thought of these hacks as something that really affected them,” Scannell says.

Could this outrage lead to reform? “Maybe now is the moment that we’ll see a shift,” Scannell says.