STEVE CHIOTAKIS: You no doubt have seen a bar code. Those line markings on all kinds of products that get scanned at the grocery store checkout. Now there’s a new type of code that’s popping up. Digital codes that link the real world with the online world.

But as reporter Alex Schmidt tells us, a lot of consumers still don’t know what they are.

Alex Schmidt: What they are is QR Codes, which stands for Quick Response. They act kind of like barcodes for your smartphone. You scan these little boxes and a website comes up on your phone. From there, you can get things like coupons or digital downloads.

And advertisers love them. QR designer Phil Warbasse explains why.

Phil Warbasse: What it really does is it turns a five-second pitch into potentially a five minute experience. It extends the time that you have to be in front of your audience.

Warbasse has worked with Chipotle restaurant to put QR codes in a menu, which takes users to a video with celebrities talking about healthy eating. And he’s created one for Paula McMath. She’s a singer who plays weekly on Santa Monica’s 3rd Street Promenade. McMath has her QR codes printed on business cards. When you scan them, they take you to a website where you learn more about her music.

But there’s a potential problem — passersby aren’t quite sure what the barcodes are.

Schmidt: Have you ever seen these?

Man 2: I’ve never seen them before.

Paula McMath: I realize that on some level, I am a little bit of a guinea pig maybe?

But being experimental could also get her noticed. Lucy Hood directs USC’s Institute for Communication Technology Management.

Lucy Hood: Think about it: you’re a consumer, you’re blobbing along. What’s happening? What will make you pay attention? Something new.

Hood thinks QR codes will need a big, sustained media moment in the spotlight to really drive mass adoption. Sort of like text messaging on “American Idol.” Hood convinced “Idol” producers to use that technology when she worked at Fox back in 2002.

Hood’s guess for QR’s big moment of exposure? She thinks it’ll happen with a movie, sometime this year. 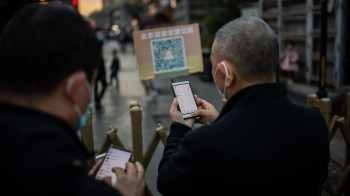 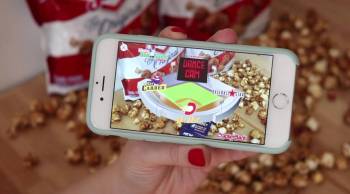 Cracker Jack prizes are now a thing of the past