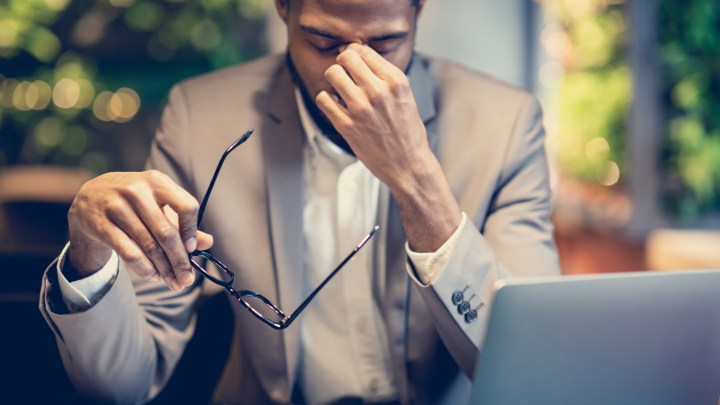 COPY
During the pandemic, with stress and mental health problems widespread, more employees have become less committed to their jobs. Prostock-Studio/Getty Images

During the pandemic, with stress and mental health problems widespread, more employees have become less committed to their jobs. Prostock-Studio/Getty Images
Listen Now

“Quiet quitting” is the new name for a not-entirely-new trend among workers. Essentially, these employees, many on the younger side, are limiting their efforts to what is required of them so they can focus on their priorities outside the job. They’re not taking on extra work, and they’re trying to set boundaries between who they are and what they do for a living.

It’s become a pretty popular idea. On TikTok, the hashtag has garnered more than 13 million views.

“Marketplace” host Kai Ryssdal spoke with The Wall Street Journal’s Lindsay Ellis about the recent article on “quiet quitting” she wrote with Angela Yang. The following is an edited transcript of their conversation.

Kai Ryssdal: The first thing we need to say about quiet quitting is that it’s not really quitting, right?

Lindsay Ellis: Exactly. I mean, what I hear from workers is that it’s just this sense of, I want to do my job but not go above and beyond and have work bleed into my personal life the way maybe it had been for the last couple of years. So I think this sense of quiet quitting in some ways is a misnomer and in some ways just speaks to the boundaries that a lot of these young employees want to set.

Ryssdal: What’s your sense of how long this has been a thing?

Ellis: It’s a great question. As I think back to just the interviews I’ve been doing, this sense of disillusionment, the sense of wanting to untether my job from my identity, that’s been a theme that’s been pretty constant over the last, you know, maybe a year or so. And so while I think the term “quiet quitting” appears to have really picked up steam since mid-July or so, I think this sense of really wanting to step up boundaries, that sense has been pretty constant among workers over this last stretch.

Ryssdal: Yeah. What are companies and employers saying about this? Because you could see them being a little bit, what do you mean? I’m paying you and you got to do the job?

Ellis: Yeah. Well, you know, Gallup has been doing a lot of polling over the years on employee engagement. And across the country, U.S. engagement is falling in the workforce. I mean, I think that’s a trend that is concerning for employers because there’s some correlation between how engaged you are at your job and how long you want to stay there, you know, how willing you might be to recommend it to a friend as a workplace. Things like that. Maybe even productivity, which, obviously, workplaces care a lot about. All of those things. So I think there’s a degree of hesitation, I mean, maybe frustration with this downturn in engagement. That is happening a lot more broadly than, than the youngest of professionals.

Ryssdal: How much do you think this would be happening if the unemployment rate wasn’t where it is, right? I mean, this is a very employee-favored environment now. And if you want another job, you can get another job. And everybody on both sides of the question knows that.

Ellis: It’s a really good point. So I talked to Elise Freedman, who’s a senior client partner at the consulting firm Korn Ferry, about this very issue. I mean, and she, you know, said the people who are consciously dialing back, who might not be raising their hand for the stretch assignments or the extra work at the end of the day, I mean, that they might be setting themselves up for a layoff if things do turn, so I think there is some realization that, that this is perhaps a byproduct of the leverage that employees have in the labor market right now. And that there could well be a risk if things do turn.

Ryssdal: All right. So on the theory that higher-ups at The Wall Street Journal aren’t listening, what’s your engagement level?

Ellis: I was joking, actually, with a colleague that, you know, the hours worked on the quiet quitting story would make a lot of Gen Z employees make fun of me, I think, behind my back. But no, I think it is sort of striking how openly folks are talking about the changes they’re making to their own work patterns.

Why quiet quitting has become a loud trend