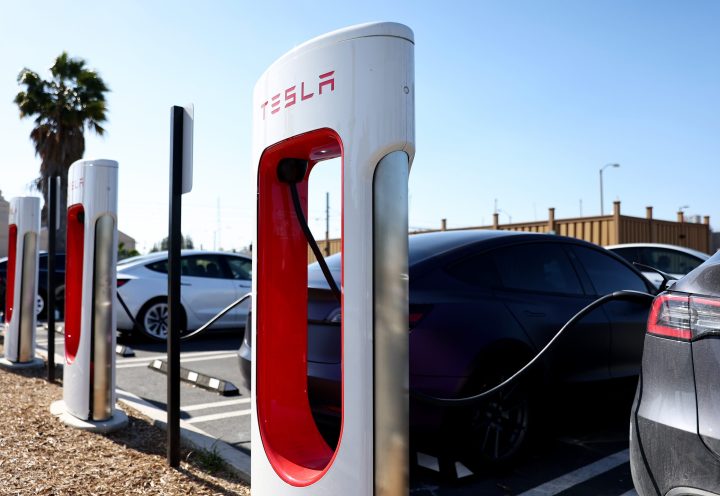 A recent White House announcement highlighted a new venture for Tesla: opening up its network of fast car chargers to other brands of electric vehicles.

Tesla’s proprietary Supercharger system only works with its own cars. But the company is already piloting an adapter system in Europe and could start rolling it out here later this year.

With 35,000 Superchargers, Tesla has the world’s biggest network of fast chargers. They can add 200 miles of range to a car’s battery in a matter of minutes, rather than the hours it takes at a standard Level 2 charger.

“The Supercharger network is just so reliable … they’re basically ubiquitous. So you never have to worry at all,” he said.

While other public charging networks are expanding, he said they’re not quite there.

“They’re just kind of this ramshackle mishmash of different chargers that are often unreliable, broken, and just it’s not a great experience,” he said.

But right now, if you don’t drive a Tesla, your electric vehicle’s port won’t work with their Superchargers. Giving all EV drivers access to this robust network would be a huge benefit for consumers … and Tesla, said Sam Abuelsamid, an analyst at Guidehouse Insights.

“They would be able to start charging and generating revenue from other drivers, which would help to offset the cost of operating that network,” he said.

According to the White House, Tesla is ramping up production of new fast chargers and will begin producing adapter systems for other cars later this year.

“I think this is a really great example of using government policy to nudge the private sector in a particular direction, that’s beneficial for society overall,” she said.

The Biden administration wants zero-emission vehicles to make up half of all new car sales by 2030. But consulting firm McKinsey estimates that’ll take a big increase in chargers – almost 20 times as many as the U.S. has now.