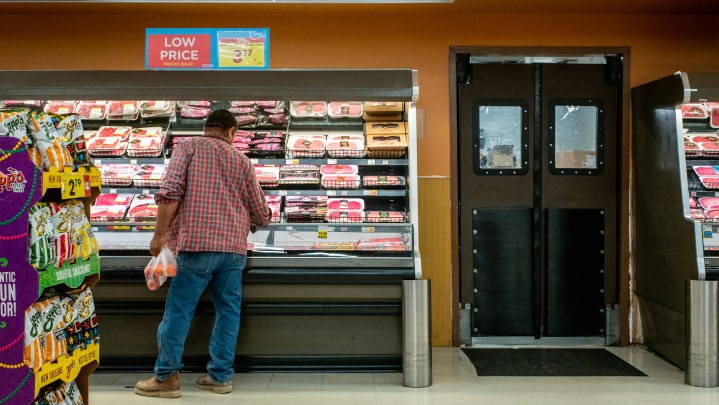 COPY
Ever notice the nostalgic music playing in grocery stores? That's often intentional — putting customers in a good mood, which might encourage them to buy more. Brandon Bell/Getty Images

Ever notice the nostalgic music playing in grocery stores? That's often intentional — putting customers in a good mood, which might encourage them to buy more. Brandon Bell/Getty Images
Listen Now

The consumer price index, which measures inflation, jumped 9.1% in June, compared to the year before. And the food-at-home category rose by more than 12%.

A lot of people are cutting back their spending because of rising prices, but groceries are a tough one; they’re a fixed expense to a certain extent. And trying to keep costs down at the grocery store is not always easy, thanks to store design, marketing and our emotions.

I kept a diary on a recent grocery run in New York:

This isn’t going to be a huge shopping trip. I usually go a few times a week. Plus, I’m doing this on foot.

The first thing on my list is an avocado. They’re right near the entrance. Bam! Got one.

Next up, lemons. Got them. Cucumber, peaches, ginger. Then watermelon. Where is the watermelon? I start doing circles around the produce section. And I find the pine nuts, which I also need. They don’t even have a price on them, but … eh, into the cart they go.

I turn right, and the watermelon is tucked away in a fridge in the corner. I don’t need a whole watermelon. So there’s the chopped kind for $3.99 a pound or sliced with the rinds on for $1.99 a pound. I’m trying to figure out which is the better deal, and people need to get by with their carts.

So the anxiety starts creeping in, like maybe I need to get out of the way. I pick the sliced ones.

“And it forces you to make a decision very fast, right?” said Magdala Adeleke, a certified financial therapist. “It’s like, ‘OK, I don’t have time for this. Let me just grab something and go.’”

That means you spend less time analyzing the price. There’s a pretty catchy song playing — “Breathless” by The Corrs. Remember them? They were big in the early 2000s.

Supermarkets choose their music carefully, said Aaron Ahuvia, who teaches consumer behavior at the University of Michigan-Dearborn and just wrote a book about brands called “The Things We Love.”

“Oftentimes, they’ll play music that’s a little bit older because it brings up these nostalgic feelings,” Ahuvia said. “And that is a positive experience for a lot of people.”

And if you’re in a good mood, maybe you’ll buy more.

I grab some smoked salmon and spend a little while trying to figure out which maple syrup to buy. Then, I head to the spice aisle for vanilla extract and cinnamon. I grab the store brand, which is only 99 cents.

Grocery stores often steer you toward their brands, because the store makes a higher profit on them, said Katrijn Gielens, a marketing professor at the University of North Carolina.

“But those products typically also have a lower price point, which may also be good for the consumer,” Gielens said.

It’s hard to know when a discount is actually good for you though — like when something’s on sale, that can trigger fear in shoppers, Ahuvia of the University of Michigan said.

“And by this, I specifically mean a fear that you’re going to lose out, that this is a rare opportunity,” he said.

And that fear can make you buy stuff you don’t even want.

What I do want is chicken thighs. So I grab some of those, and then turn into the milk and cheese aisle, on the far end of the store — I can’t leave without almond milk.

Gielens said the location is intentional. The stuff you need is always in the back. “Why is that? Because it makes you sort of go through the entire store,” she said.

“Especially in a supermarket context,” she said. “The margins are so thin.”

These impulse buys get to that part of our psyche that’s like, you know, it’s been a tough day, according to Adeleke.

I keep going around the corner. And, how helpful! The toilet paper and paper towels have been strategically placed at the end of an aisle right before the register.

Gielens said supermarkets don’t necessarily want you to overspend because then you might not come back, “but they really want to make sure that whatever you want to spend on groceries, that you do it at their store.”

At the register, I find out the pine nuts are $4.99 for a teeny little packet. I leave them behind.

Without the pine nuts, it’s $51.37. It’s a little more than usual, thanks to a few items I don’t get every time (looking at you, maple syrup). I lug my bags home — exhausted.