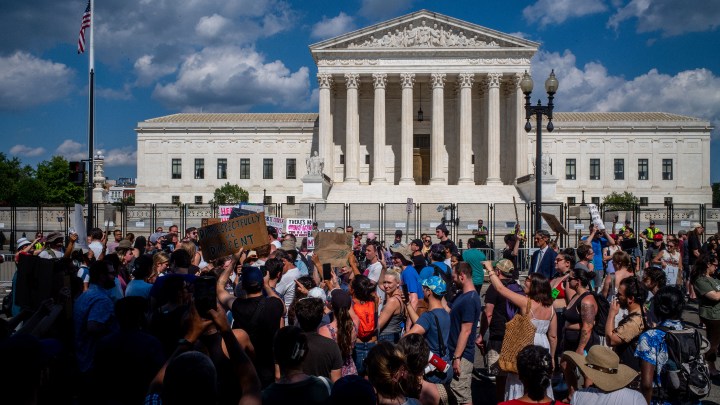 COPY
"In a country that has fought vehemently against universal health care, our maternal mortality rates are some of the worst in the industrialized world. Forcing birth is only going to make that worse," says Lina-Maria Murillo of the University of Iowa. Brandon Bell/Getty Images

"In a country that has fought vehemently against universal health care, our maternal mortality rates are some of the worst in the industrialized world. Forcing birth is only going to make that worse," says Lina-Maria Murillo of the University of Iowa. Brandon Bell/Getty Images
Listen Now

The Supreme Court’s decision to overturn Roe v. Wade will have broad economic consequences, mostly for already disadvantaged groups. The court’s ruling opens the door for states to further restrict or outright ban abortion, so someone wanting an abortion in the middle of a state that’s banned the procedure could find themselves hundreds of miles away from an abortion clinic, or unable to afford travel to a clinic.

Lina-Maria Murillo, an assistant professor of gender, women’s and sexuality studies at the University of Iowa, spoke with Marketplace reporter Nancy Marshall-Genzer about the changing landscape of abortion access and the consequences of those changes. The following is an edited transcript of their conversation.

Lina-Maria Murillo: I’m currently living in the Midwest, I live in Iowa. I’m visiting in Wisconsin. Wisconsin is no longer offering abortion care. Neighboring Minnesota is. Illinois, as well, is continuing to offer abortion care. In Iowa, there is a 24-hour waiting period in effect, which will likely turn into an all-out ban. And so we’re beginning to already see the way that the map is creating these corridors of care and producing these internal borders for denial of access to care. And so you’re also going to see movement into Canada, and likely people traveling down to Mexico for abortion care.

Marshall-Genzer: And for people who are not able to access abortion, could this decision send the mortality rate higher?

Murillo: In a country that has fought vehemently against universal health care, our maternal mortality rates are some of the worst in the industrialized world. Forcing birth is only going to make that worse, because at this particular moment, there is no commitment, by any politician, to strengthen our safety nets, especially when it comes to health.

Marshall-Genzer: And teenagers could have real problems. The American Academy of Pediatrics, in fact, issued a statement saying the Supreme Court decision will have what it calls “grave consequences” for their adolescent patients, because they face more barriers than adults in accessing reproductive health care services and abortion. So how could they be affected economically?

Murillo: You know, all people who become pregnant who do not want to be — getting denied access to an abortion — it’s essentially pushing them deeper into poverty. Now, when we’re talking about children, you’re a compounding already folks who are not always able to consent for themselves. And so you’re essentially cutting them off from making major decisions about the future. And a lot of the laws that are going to be coming on the books are incredibly cruel. They make no exception for incest, for instance, or rape. And so you’re going to see a lot of very young people being forced to give birth.