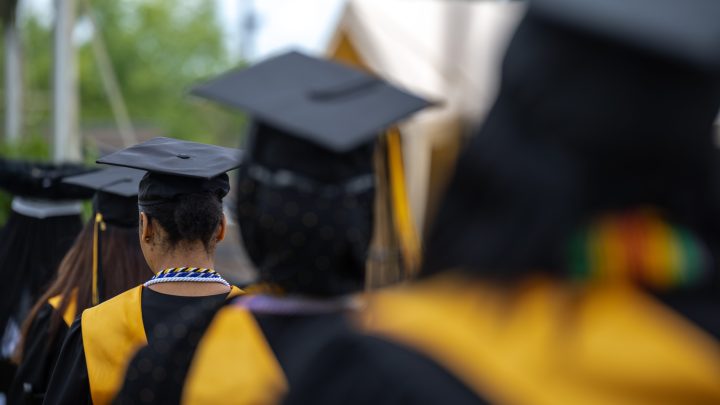 Every month, the U.S. Treasury Department auctions off bonds to fund the government’s debt. It held one such auction Wednesday, selling 10-year Treasury notes at an interest rate of 2.94%.

That’s the highest the rate at auction has been in a while, and it affects not just the bond market, but lots of things, including how much it costs to borrow money for college. The federal government issues around $90 billion in student loans each year, and the interest it will charge in the near future stems directly from the yield at Wednesday’s auction.

Congress established a formula to tie student loan interest rates directly to the yield on the 10-year Treasury note back in 2013.

“Prior to that, Congress just kind of made up an interest rate, believe it or not,” said Jason Delisle, senior policy fellow at the Urban Institute.

According to Delisle, after the 2008 housing crisis and recession, an interest rate that didn’t change felt out of sync with the markets.

“People were saying at the time, ‘Why can’t this work like mortgages?’ So that was the idea,” he said. “A 10-year Treasury plus about 2 percentage points, at least for undergrads, that’s the system that gets you pretty close to what a mortgage rate is.”

In the current system, the interest rate for new federal student loans changes every July. For undergraduate loans, the government takes the yield from the May auction and adds about 2 percentage points.

Graduate students and parents have a higher markup, and when the yield on the 10-year goes up, like it did Wednesday, it’ll cost new borrowers more.

Mark Huelsman is the director of policy and advocacy at the Hope Center for College, Community, and Justice at Temple University.

“They’re going to be paying, you know, in some cases, thousands more dollars on their debt than students who went to school maybe last year or a couple years ago,” Huelsman said.

Right now, there’s a federal pause on student loan repayment, and no interest is accruing during this period. But that pause is set to end on Aug. 31, which means students will need to think about how they’ll pay back their debt and maybe how much they take on in the first place.

“There are certain professions that the labor market just doesn’t compensate you very well for those jobs,” said Catharine Hill, managing director at the education nonprofit Ithaka S+R.

Hill said if students want to do those jobs, or if they don’t know what they’re going to do, they shouldn’t borrow huge amounts of money. It could be difficult for them to pay it back.