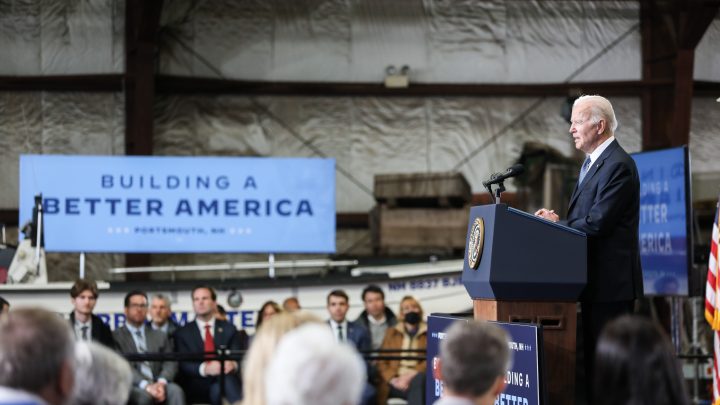 COPY
President Biden is on an infrastructure tour of the US, discussing the recent Bipartisan Infrastructure law, but inflation is causing a few roadblocks. Scott Eisen/ Getty Images

President Biden is on an infrastructure tour of the US, discussing the recent Bipartisan Infrastructure law, but inflation is causing a few roadblocks. Scott Eisen/ Getty Images
Listen Now

The Biden administration is trying to make this infrastructure week. President Biden was in Portsmouth, New Hampshire, yesterday to tout improvements to ports that will be made with money from the Bipartisan Infrastructure Law. Tomorrow he travels to Portland, Oregon, with a similar message.

Inflation could throw a wrench into all this infrastructure spending.

Michael Sakata, CEO of the Maryland Transportation Builders & Materials Association, has seen it in steel prices. “You know, we have seen 400% increases and even more, to some degree, on some of these structural steel materials,” he said.

According to a new report from S&P Global, the Producer Price Index for building materials and supplies increased more than 58% from January of 2020 to March of this year.

According to S&P’s Kurt Forsgren, a co-author of the report, there is one bright spot — the biggest projects that’ll get Bipartisan Infrastructure Law funding haven’t gotten off the ground yet. The hope is that inflation will be lower by the time they get underway.

“The primary question is how long is it expected to last, and I think everyone’s hope is it doesn’t last too long and this small blip in the road will just be that, no pun intended,” Forsgren said.

Even if prices do fall, infrastructure projects face other hurdles. Supply chain issues and worker shortages are the big ones. And all of these challenges could force state and local governments to make some tough choices.

Leah Brooks, an economist at George Washington University, said they might put the biggest projects that need the most workers and materials on the back burner.

“There’s an incentive to choose projects that you think you’ll be able to complete more quickly, and that’s probably projects that are less risky, or less ambitious,” Brooks said, like paving roads and repairing potholes.

If costs don’t go down, state and local governments could borrow money, apply for more federal grants, or raise taxes and fees to pay for the big projects.