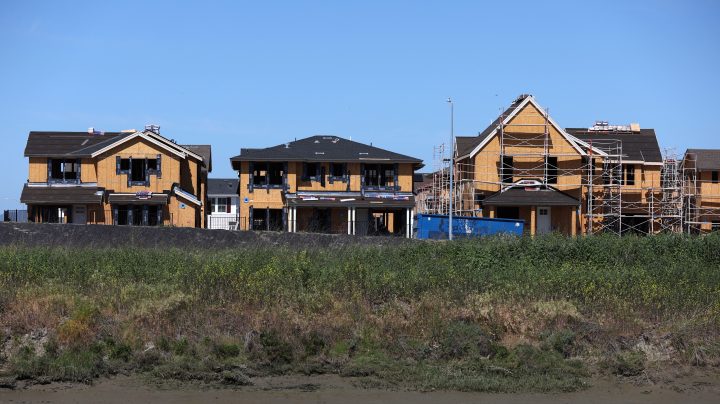 COPY
Applications for home mortgages and loan refinancings are slowing down. Will inflation follow the trend? Justin Sullivan/Getty Images

Applications for home mortgages and loan refinancings are slowing down. Will inflation follow the trend? Justin Sullivan/Getty Images
Listen Now

Higher interest rates are already having an impact on the housing market. Specifically, on mortgage applications.

He said that’s partly because there just aren’t many homes for sale right now. But it’s also because mortgage interest rates have risen and made mortgage payments more expensive.

“What we’ve seen, really over the last year, is about a $300 or so increase in the median monthly mortgage payment,” Kan said.

Applications to refinance home loans have fallen by about 36% over the last month, according to Kan. Jim Vogel at FHN Financial said this limits many people’s spending.

“Last year, there was about, maybe, $200, $250 billion of spending power that was freed up by people refinancing, and taking cash out from their existing loans or their existing equity, and that goes straight into the economy,” Vogel said.

The Federal Reserve’s decision in March to raise its benchmark interest rate by a quarter of a percentage point has affected the rates businesses pay, too. Vogel said they’ve risen about half a point in the last few weeks.

“Those costs may change certain expansions they would look at, in terms of infrastructure or buying new plants and equipment,” he said. Higher interest rates increase costs for people and corporations and reduce spending power. And that cools down demand.

Senior economist Sarah House at Wells Fargo said cooling down demand is one way to achieve the Fed’s goal of curbing inflation.

“A lot of this inflation stems from the fact that we had seen such significant demand, making it hard for the production side of the economy to keep up,” House said.

She said we can expect to see interest rates rise for auto loans, too. Credit card rates could go up as well, making it more expensive to buy appliances and furniture on credit.

According to House, demand for those items could already be falling as consumers spend less on goods and more on services.