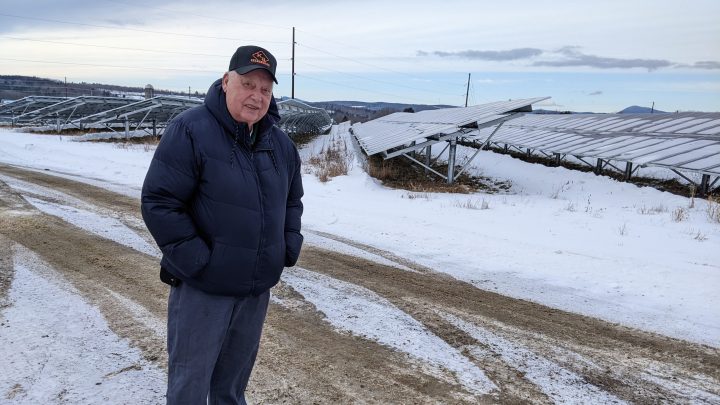 COPY
Farmer Bussie York stands amidst the large solar array of about 300,000 panels on his farm in Farmington, Maine. Robbie Feinberg/Maine Public

Farmer Bussie York stands amidst the large solar array of about 300,000 panels on his farm in Farmington, Maine. Robbie Feinberg/Maine Public
Listen Now

Bussie York has done everything from growing sugar beets to raising cows on his farm along the Sandy River in Farmington, Maine. But as he walked through the field on a recent windy morning, much of it is now covered in row after row of metallic blue panels.

York said these panels have helped to keep the business afloat. The farm lost its major milk buyer about four years ago. With few options to replace that income, York accepted an offer from a solar developer to erect panels on about 300 acres. He saw it as a way to help the state move toward cleaner energy and the best of the renewable choices.

“Windmills, or it’s damming up the rivers, or water power. Or it’s solar,” York said. “And we just chose solar as being the least offensive to the area.”

Yet the project highlights a growing tension between Maine’s booming solar industry and the effort to preserve a limited supply of farmland.

After new solar incentives in the state were created three years ago, many farmers were inundated with calls from developers, willing to pay $1,000 an acre to lease and build solar arrays on their farmland. New solar generation in the state more than doubled between 2020 and 2021.

Ellen Griswold, policy and research director of the Maine Farmland Trust, said that while she supports the state’s efforts to move away from fossil fuels, she worries about unintended consequences of losing valuable acreage.

“I mean, we’ve all experienced the supply chain disruptions that have resulted with the pandemic,” Griswold said. “And areas where we currently import a lot of our food from are experiencing greater climate impacts than we are, in Maine. And so making sure we have a robust local and regional food system is really important.”

Now, state lawmakers are trying to figure out how to balance both industries. One potential option: piloting “dual-use” solar projects, where farmers grow crops or raise livestock underneath and around the solar panels on their land.