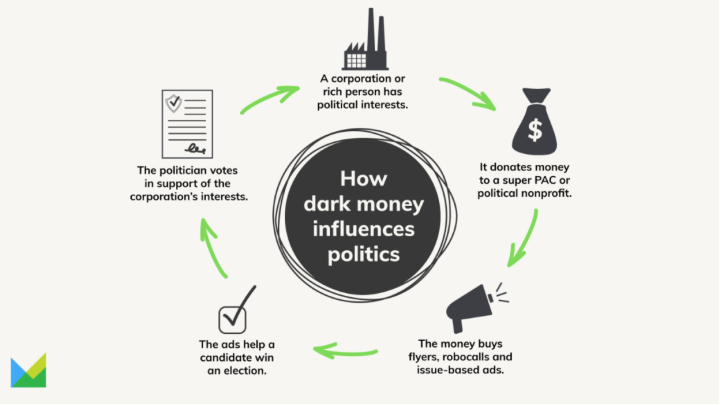 A circular flow chart shows how dark money can funnel through politics and influence policy and elections. Ellen Rolfes/Marketplace

Just how pervasive is dark money at a national level?

“There was an effort in the Democrats voting rights bill to include pretty significant changes to campaign finance laws. It would have made more of these dark money groups required to disclose their donors,” Adams explained. “But that bill failed.”

While Democrats have led recent efforts to increase transparency in campaign finance, Adams noted they also took the lead in spending dark money in the 2020 elections. According to a New York Times investigation, groups aligned with Democrats spent more than $1.5 billion in dark money, while groups aligned with Republicans spent more than $900 million.”

Listen to their full interview on the Marketplace website.

It can be hard to remain upbeat on the possibility of reform. As listener Marilyn K. watched the documentary, she found herself cheering for “all the small wins” … and far less optimistic about the bigger picture.

“The whole thing makes my stomach hurt. I think they are right when they say this country is at a turning point.”

The sentiment was echoed by Chris B.

“What a piece to either make your blood boil, make you nauseated, or simply urge you to pack your bags and head to some other country that has not devolved as tragically as this one has. There is such hypocrisy when you compare the level of regulation on money laundering in the financial sector, and yet the floodgates are open with regard to political money laundering. With so many wolves already inside the hen houses, how can average Americans feel anything but cynicism and despair over this?”

Some of you shared recommendations on the same theme.

Page W. suggested Jane Mayer’s 2017 book “Dark Money: The Hidden History of the Billionaires Behind the Rise of the Radical Right.”

“This book is the single best exposé of dark money in politics,” Reed wrote. “Jane Mayer covers it all: the sources, the methods used and the history. The Koch brothers are the most well-known of the buyers of politicians and legislation, but they aren’t the only wealthy individuals doing it.”

And here’s a recommendation from us: the website of research and transparency group Open Secrets, which offers illuminating rundowns of the biggest election spenders and a fantastic overview of dark money and the different shapes it can take. Open Secrets’ information is useful to anyone who wants to learn more about who is spending in elections — and how much money they’re spending.

Thanks for writing in! Next week, we’ll preview our March film selection. Do you have a documentary recommendation you’d like Econ Extra Credit to consider? Email us at extracredit@marketplace.org.