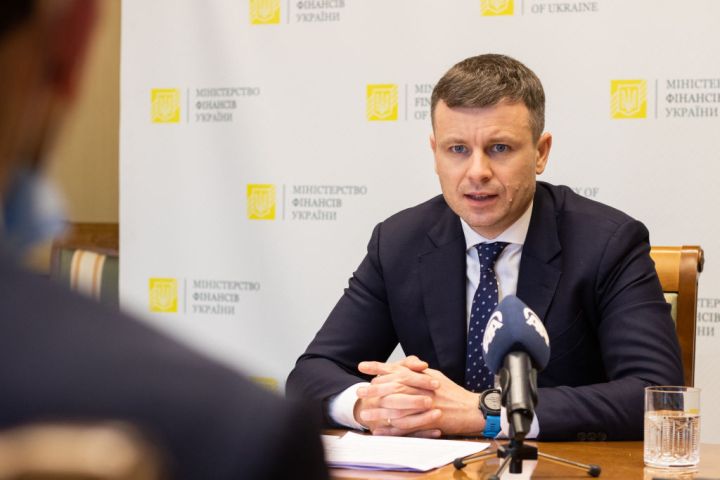 He also condemned Russia’s attack on Europe’s largest nuclear plant. The Zaporizhzhia plant in Ukraine supplies 20% of power to the country and Marchenko said that by securing the plant Ukraine would not just be saving itself but the whole of Europe.

In recent days Ukraine has received billions of pounds in support from the IMF, World Bank and the European Union. Marchenko said that money would be used to not only pay pensions and salaries but also to support the Army.

Below is an edited transcript of the interview.

Victoria Craig: Are you worried about the ability to keep the lights on for people across the country?

Marchenko: Yes, it’s also quite crucial, because on the particular territories, which occupied right now by Russia, as they lost some power and some connection to the phones, to the internet. So for this particular time, it’s important to restore this ability to to get this power, etc.

Craig: The invasion has entered its second week, we’ve talked a lot about the economic and financial impact, not just on your country, but countries across the world. Are you even able yet to assess the impact on Ukraine?

Marchenko: Our Ministry of Economy estimated losses up to $500 billion. What is a preliminary estimation, because it’s not easy right now to really estimate our real losses. Only after we see the last Russian soldiers give up our territory, we can look and estimate our losses of infrastructure, of economy. Now, the only way to protect our country is to combat in all possible ways: diplomatic way, financial way. sanctions, and, of course, in the fields of war.

Craig: And you together with the Central Bank have applied to the IMF for more financing through the emergency assistance program. What support do you need at this point?

Marchenko: Yesterday, we received a 1.2 billion euro macro-financial agreement from the European Union. Also we sign up agreements with World Bank, which top up for 1.8 billion euro, you mentioned IMF, they now looked at possibility to open for Ukraine rapid financial instrument to support our liquidity balance up to $1 billion.

Craig: And what will you do with that money? How will it be allocated?

Marchenko: The key questions that you should be able to fulfill as a government, to execute our key functions: to pay pensions, salaries, social security, as well as army support and protected expenditure on debt repayment.

Craig: We’ve seen a number of crippling sanctions announced by Western governments over the last several days against Russia, do you think they go far enough?

Marchenko: I don’t think enough, it’s a question of timing, maybe damage the economy, but it’s takes some time to really fulfill this idea. And for us time is very important when I might reserve G7 ministers of finance this week. I also mentioned that U.S. sanctions should be more restrictive and more severe for Russian economy. For example, it could be investment funds, who could sell all possible assets of Russia and index can make some possible ways to damage Russian economy to make it cancel in the indexing Russian assets as well.

Craig: Were the G7 ministers open to that?

Marchenko: I don’t know. Our citizens is suffering. We are suffering not just for our independence. Doing means that we are trying to stop Russian aggression which can move through our borders towards European borders. I believe that our neighbor countries, especially Poland, which very involved in this particular situation could do to make it possible more sanctions and more military support for Ukraine, etc.

Craig: One of the things being discussed also is the United States ability to prevent the sale of Russian gas. Are you still receiving money from the Russian government to transit gas through pipelines in Ukraine?

Marchenko: We bought gas, if you bought it from outside of Russia from our East European counties, we did it from 2017. It’s not a way that we buy our gas from Russia.

Marchenko: I think it’s impossible, because it’s just transit pipeline, we can damage other countries, but I believe it’s not possible to just do just stop transferring gas from Russia to the European countries.

Craig: We’ve been talking about financing for the ongoing war efforts. And one of the things that’s captured global attention is the decision to issue war bonds.

Marchenko: Yes, now we had one motion of full bonds, and we receive up to $300 million in our accounts, and next auction will be next Tuesday. And we now we are working closely with our international partners to enable them to get access to our international market to buy these bonds.

Craig: And how will those proceeds be used?

Marchenko: We use war bonds specifically on financing our deficit. And it’s included our military support, it’s included all protected expenditure, which I mentioned before, so it’s just financing deficit.