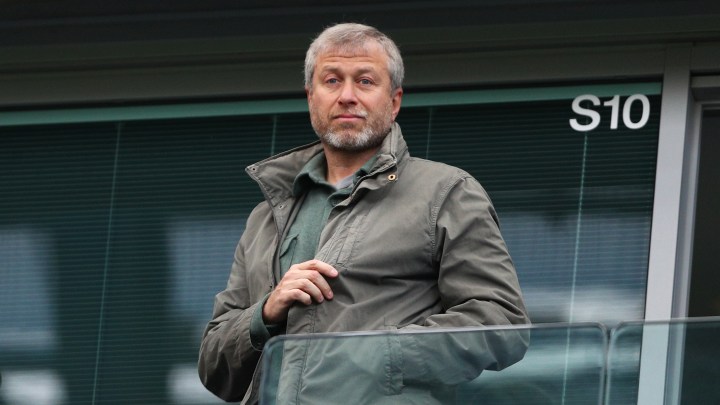 COPY
Roman Abramovich, owner of the Chelsea soccer club and one of London's most well-known Russian oligarchs, has not yet been sanctioned by the United Kingdom. Paul Gilham/Getty Images

Roman Abramovich, owner of the Chelsea soccer club and one of London's most well-known Russian oligarchs, has not yet been sanctioned by the United Kingdom. Paul Gilham/Getty Images
Listen Now

The United Kingdom has played a leading role in the economic war against the Kremlin over Vladimir Putin’s invasion of Ukraine. The Brits pushed for the exclusion of certain Russian banks from the SWIFT payment system and urged their allies to freeze Russian reserves, restricting the Russian leader’s ability to dip into his $630 billion war chest.

But when it comes to sanctioning individuals, the U.K. has been less forthcoming than the United States or the European Union. In theory, the U.K. should be well–placed to freeze oligarch assets. There are believed to be scores of very wealthy Russian individuals with strong links to the Kremlin who own very expensive real estate in the British capital and elsewhere in southern England.

One of these oligarchs, billionaire banker Mikhail Fridman — who lives in a multimillion-dollar mansion in London — held a news conference recently to complain about the financial targeting of individuals like himself.

“Imposing sanctions against us here just creates enormous pressure for us personally,” Fridman said. “But we do not have any impact on political decisions.”

Fridman has been sanctioned by the EU but not yet by the U.K. And neither has Britain’s most famous Russian oligarch, Roman Abramovich, the owner of Chelsea, the Premier League soccer club.

Abramovich has been feted by Chelsea fans for restoring the club’s fortunes since he bought it in 2003, but he has not been feted in Parliament in recent days. The leader of the opposition Labor Party, Keir Starmer, demanded the billionaire be sanctioned now “because of his links to the Russian state and his public association with corrupt activity and practices.“

Following Starmer’s call, Abramovich, who said he’s done nothing wrong, has scrambled to sell the club for a reported $4 billion. And he’s said to be trying to offload his two London homes valued at $230 million.

Roman Borisovich, a Russian-born anti-corruption campaigner now based in Europe, believes Abramovich is being let off the hook.

“He wants to sell his properties in London and, if he’s not sanctioned soon enough, he’ll sell it and run away with the proceeds,” Borisovich said.

Abramovich said he will donate the “net“ proceeds of the sale of the club to the victims of the war in Ukraine. Borisovich is skeptical about that and deplores what he calls the tardiness of the British authorities in the Western crackdown on Russian kleptocrats.

“The U.K. is the weakest link,” he said. “Despite the outrageous concentration of Russian money in London … nothing has been done”

Speaking in Parliament this week, Prime Minister Boris Johnson denied that this was the case.

This may be true of the systemic measures like sanctioning the Russian Central Bank, for example, and the exclusion of certain banks from the SWIFT international payment system. But just 15 Russian oligarchs have so far been formally and publicly sanctioned by the U.K. — far fewer than in the EU.

Unlike France and Germany, which have both seized oligarch superyachts, the Brits haven’t apparently seized anything yet. For James Bolton-Jones of the Spotlight on Corruption group, it’s the old story: Britain’s chronic reluctance to crack down on the $130 billion worth of dodgy cash that the National Crime Agency estimates is laundered in the U.K. every year — some of which, Bolton-Jones said, is undoubtedly Russian in origin.

“There are certain vested interests that have not been very keen to have this tap of dirty money turned off because they benefit from it,” Bolton-Jones said.

The vested interests he refers to are bankers, lawyers, accountants, realtors and public relations companies. According to the anti-corruption group Transparency International, there are nearly 600 firms and individuals in the U.K. offering services — unwittingly or otherwise — to those with suspicious wealth.

It’s also worth remembering that the ruling Conservative Party has received big donations from people close to Putin, said Tom Keatinge, director of the Centre for Financial Crime and Security Studies.

“That definitely gives those who believe the Johnson government is in hock to Russian money plenty of ammunition,” Keatinge said.

The government insists that in light of Putin’s “horrific” invasion of Ukraine, it’s totally committed to waging economic war on Russia, and it’s committed to dismantling the London laundromat. A pity, campaigners say, if it takes so many Ukrainian deaths to make the U.K. finally clean up its act.