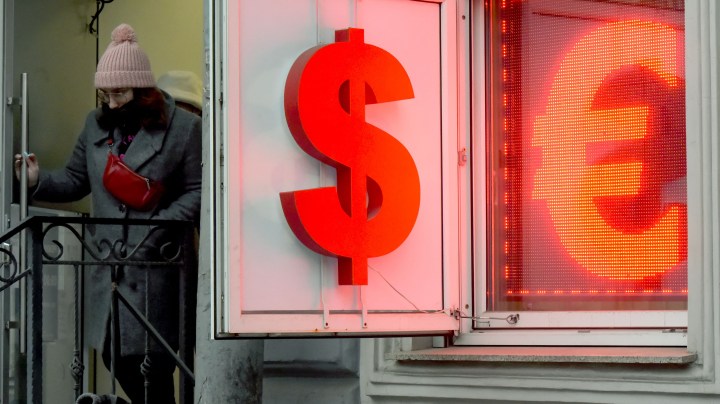 COPY
A currency exchange office in St. Petersburg, Russia. People are trying to unload their rubles as the value of the currency plummets. Olga Maltseva/AFP via Getty Images

A currency exchange office in St. Petersburg, Russia. People are trying to unload their rubles as the value of the currency plummets. Olga Maltseva/AFP via Getty Images
Listen Now

The value of the Russian ruble has plummeted to a record low, a reflection of international sanctions imposed in response to the invasion of neighboring Ukraine. Russia has fought back financially using the power of its central bank, and it has been been preparing for years by reducing its dependence on the global financial system.

Its hands have largely been tied, though. One way to understand this is by observing that currencies are like toilet paper and copper and houseplants … and anything else that’s bought and sold.

That’s because, firstly, a currency has a price. Think of it like a price tag you’d see at the grocery store, but in this case it’s a price in other currencies. That’s what we are talking about when we say the value of a currency is falling or rising.

“When we say the Russian ruble is falling, we’re saying it takes more Russian rubles to buy a U.S. dollar,” said Chris Vecchio, a senior strategist with DailyFX.

That price is affected by good ol’ supply and demand. If nobody wants a ruble, its value goes down.

“So the ruble is losing value relative to the U.S. dollar very rapidly,” Vecchio said.

Normally, currency values flop around, like the price of fish. That’s what’s called a free-floating currency — it just bobs around based on supply and demand.

But there are things countries do to manipulate supply and demand for currency, therefore manipulating the price. One thing is raising interest rates.

“When interest rates are higher relative to one country, it becomes an appealing destination for capital to flow there,” Vecchio explained.

If a country’s interest rates are superhigh, then you — an international investor — might make a lot of money investing in that country’s currency. So you might choose to buy that currency, which boosts demand.

“In recent days, the Central Bank of Russia has doubled rates from 10% to 20% and is desperately trying to stabilize the value of the ruble,” Vecchio said.

So when you hear that the Russian central bank raised interest rates to 20%, they’re saying to investors everywhere: “Wait! Don’t run away! Buy more rubles! We will give you so much money if you do!”

“These interest rates are pointless to foreign investors,” said Simon Harvey, head of foreign exchange analysis at Monex Europe. Sanctions have made rubles toxic in much of the world.

“So what you’ve currently got is an international market that basically no longer exists,” he said.

In reality, Russia’s sky-high interest rates are advertising to Russians within the country who are trying to ditch rubles, Harvey said. Now there’s something else countries do to influence the value of their currencies — and that’s create artificially high demand.

“The general idea is the central bank had this big coffer of money, and they could use the foreign currency to go into the market and buy rubles, basically to offset the impact of depreciation,” Harvey said.

The bank will literally buy its own currency to prop up demand. Kind of like how people create fake product reviews online to make a crappy product look really popular.

But the Central Bank of Russia can’t even do this because most of its reserves are held at other central banks around the world, and they’ve been frozen. That’s a big deal.

“As long as Russia continues to press forward with its wanton aggression toward Ukraine, the ruble will remain under pressure. There’s no two ways about it,” said Chris Vecchio with DailyFX.

Whether it has any impact on the war — that’s a different story.