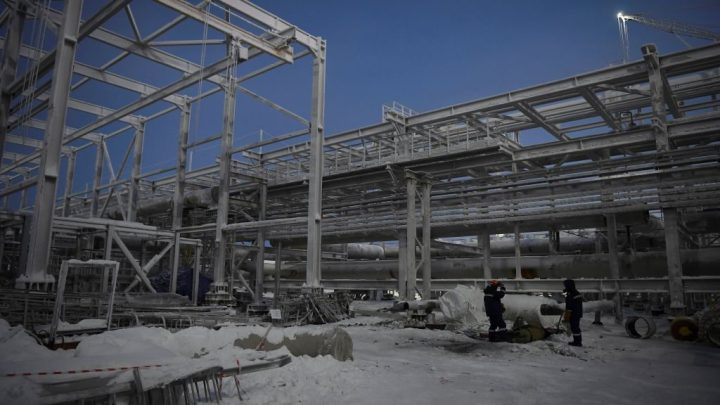 Energy is a critical part of the Russian economy — oil and natural gas sales contributed over one-third of Russia’s budget last year. Yet the raft of economic sanctions placed on Russia by the U.S. and its allies have largely avoided the energy sector. So what’s the deal?

As it turns out, explicit sanctions might not be necessary to damage Russian oil and gas. “Marketplace” host Kai Ryssdal spoke with Rachel Ziemba, an adjunct senior fellow at the Center for a New American Security, about the Russian energy loophole and Russia’s place in global energy markets. The following is an edited transcript of their conversation.

Kai Ryssdal: Could you lay out for me, please, the big loophole in all these sanctions — the energy sales part of it versus the other restrictions that have been put on some Russian energy companies?

Rachel Ziemba: Sure. The sanctions program[s] were designed not to impede current sales of energy, of oil and gas. And that’s really a function of the dominant role that Russia plays in those markets. Now, there have been some more direct, targeted measures, but what we are seeing right now is that the financial stress and strain have meant that a lot of companies are not really willing to take cargoes and shipments from Russia right now. And Russian oil, if you’re a discretionary buyer of Russian oil, people are demanding really big discounts on Urals [a popular grade of Russian crude oil] as we speak.

Ryssdal: Let’s talk for a second about some of the ancillary, trickle-down effects of the general situation. And I want to ask specifically about BP, British Petroleum, getting out of its nearly $15 billion investment in Rosneft, the big state-owned energy company over there. There’s pressure on other oil companies. There is a stigma that now attaches to Russia, energy and otherwise, that’s making companies change their behaviors.

Ziemba: That’s definitely true. And just before we started to talk, I saw news that Shell had also announced their plans to exit. So this is part of a broader trend, a range of political and ethical and other risks have definitely been built up. The other issue is that I think companies are looking out at their long-term strategy. So I think this is a function of the sanctions regime imposing significant short-term costs and then companies probably feeling that the long term benefits of being in Russia — especially a Russia that is willing to engage in policies that cut itself off from global norms and the global economy — just isn’t worth that risk.

Ryssdal: As a person who studies this, step back for a minute and talk to me about the speed at which these sanctions seem to be happening. [Last week] cutting Russia off from SWIFT [global payments system] was not on the table, right? And presto-chango, over the weekend, it was. And it’s remarkable how fast it’s happening.

Ziemba: It is. It is remarkable. I’m hesitant to use the word “unprecedented.” I mean, the U.S. Treasury used it many times in its statement. But this is really unique, both in the speed at which measures have come and the degree of coordination. Normally, what one might do even with powerful measures is impose them and see what happens and then maybe escalate. We saw from about Feb. 22 onward, we’ve seen every day, pretty much, escalating measures. And that I think is really a function of the speed of what was happening on the ground, the war, but also concerns from the public, concerns from officials that what had been done wasn’t enough.

Ryssdal: Do you suppose there will come a time — and it’s tough, obviously, with war — but do you suppose there comes a time when the energy loophole that we started with, the idea that Western currency is still flowing into Russia, which to be clear, it is, that people just say, “We can’t do this anymore. We’ve got to stop”?

Ziemba: There’s always a scenario in which that happens. And I would say the political pressure to do something that restricts energy flows is rising. The U.S. government and allies will either have to provide somewhat more clarity about how this energy exemption really is going to work or they’re going to sort of allow that ambiguity to reinforce it. Because what’s really happened is the speed and layering of sanctions and other measures have created a degree of financial crisis in Russia. The combined measures have a greater impact than the sum of their parts.