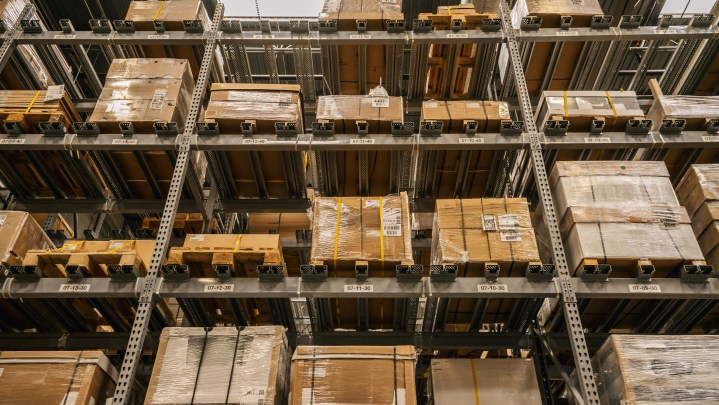 COPY
Inflation may allow wholesalers to turn a profit on older goods that would ordinarily be sold at a discount. Brandon Bell/Getty Images

Inflation may allow wholesalers to turn a profit on older goods that would ordinarily be sold at a discount. Brandon Bell/Getty Images
Listen Now

A lot of seasonal merchandise, buried in containers, is arriving late due to supply chain problems. That means apparel wholesalers are stuck with a lot of clothes that were designed to get to retailers earlier this winter.

Although they make products for brands you know, most clothing wholesalers are companies you’ve probably never heard of. “They’ll work on the actual design, the manufacture, the importing and then the storing of the product and selling it on to a retailer,” said HSBC commercial banker Eric Fisch.

Since the pandemic started, Fisch said, retailers (the brands you’ve heard of) have been canceling wholesale orders. For decades, that was really rare.

“So the wholesaler now has a difficult decision to make: Do you sell it off at a very steep discount? Or do you hold it, waiting for — hopefully — the retailer to decide they’re going to take it?” Fisch said.

In the past, any clothes that wholesalers couldn’t sell would probably have landed on the clearance rack. That’s changed. “They’re going to try to hold the line as much as possible, as the season progresses, to sell goods at the level that they consider full price,” Fisch said.

That can be hard to do with seasonal items. Just ask Ginny Pasqualone, CEO of kids’ clothing wholesaler Sparkledots.

There’s row upon row of Christmas dresses sitting in Pasqualone’s storage area right now. She’s still recovering from this past holiday season, when retailers held sales early and consumers got a jump on holiday shopping. At the same time, a lot of her inventory came in late. To get it to her customers, she spent big on air freight.

“Honestly, the companies knew that they had us by the you-know-what,” Pasqualone said of the air freight carriers. “They were able to charge whatever they wanted to.”

To help make up for it, Pasqualone is keeping her stash of adorable, totally out-of-season holiday dresses in storage until next Christmas.

“It’s either that or try to dump it below cost, and the market is flooded with other manufacturers trying to do the same thing,” she said.

Even now, with the holiday mayhem behind us, wholesalers are scrambling to keep up with ever-rising costs of everything from raw materials and production to transport.

That’s been the experience of Chris Volpe, chief financial officer and chief operating officer of the wholesaler United Legwear & Apparel, which sells to a wide range of retailers, Dollar General and Neiman Marcus among them.

“Usually, you lock down your price, it’s good for six months. You go through your development process, you sample it, you place your production and you’re locked in,” Volpe said. “We’re finding that if we don’t place production this week and we place it next week, cost increases could be dramatically different.”

But there’s a silver lining to that. Generally, apparel loses value the longer it sits around, whether on a retailer’s shelf or in a wholesaler’s storage unit. The recent surge in inflation has changed the equation.

“This is the first time in probably 30 years that you have an inflationary impact in retail where apparel products are actually increasing in price,” said Volpe.

So waiting to sell older apparel — at full price — that cost less to make a year ago might end up saving the wholesalers money.

“I hate to say it as a CFO, but it’s not necessarily a bad thing that your inventory turn slows because you own the goods at a better value,” Volpe said.

That explains why holding, not rushing to sell, is a gamble Volpe and others are willing to take right now.