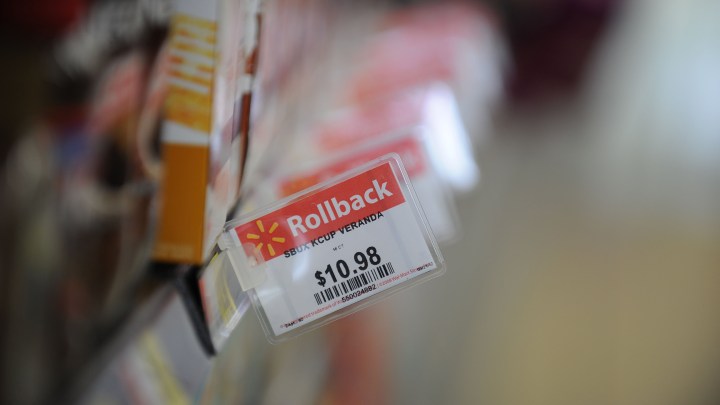 Walmart reported strong earnings Thursday — it turns out the company may be getting a boost from inflation. The retailer has made a name as an affordable destination for price-sensitive shoppers with things like “price rollbacks” — flash sales that, despite rising costs, are still taking place.

This hasn’t exactly been a deal hunter’s economy lately. As we head into a holiday weekend that’s usually marked by sales, what are consumer expectations for price cuts?

Ben Cotton in Lafayette, Indiana usually looks to price to make decisions about what groceries to buy.

“I’d get the Sunday paper, I’d go through the ads and then clip all the coupons,” Cotton said.

But whenever he goes to the store, “there’s always one thing on my list where, you know, it’s like you spin a wheel and that’s what’s not there, this week.”

Two opposing forces are pulling at consumers right now, according to marketing professor Charles Lindsey at the University at Buffalo.

Over the holidays, spending was strong even as retailers offered fewer bargains. But as time goes on, shoppers could increasingly hold out for discounts, said Eric Johnson, a marketing professor at Columbia Business School and author of the book “The Elements of Choice.”

“Raising prices is seen as OK if you have a business reason for it,” Johnson said. “Now, you’re starting to see people think it may be greed.”

And they’ve been rising over a long period, according to Joel Rampoldt at AlixPartners. “Inflation is cumulative. And the effects are not being fully felt yet, there’s still some hangover benefit from stimulus, which gave people some cash in their pockets,” Rampoldt said, adding that we’re at an inflection point where retailers may need to court consumers more heavily.

But they may be wary of over correcting, said Barbara Kahn, a professor of marketing at The Wharton School at University of Pennsylvania. Running too many promotions can condition consumers to expect them forever.

“And if they don’t have a discount, then they feel like they’re being ripped off,” Kahn said.

Not to mention that sale item could be stuck on a container ship in the Pacific Ocean.