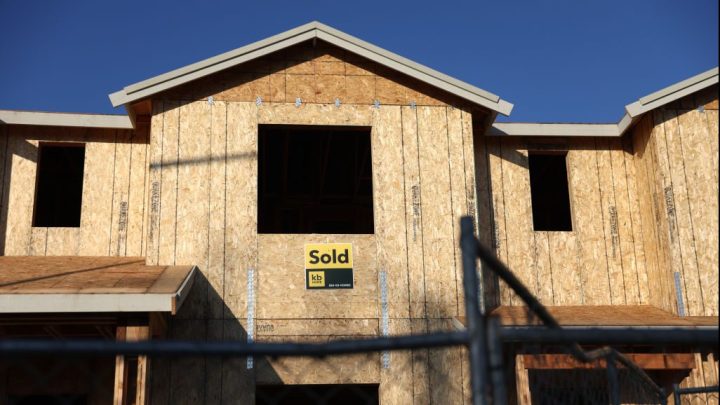 COPY
"The market wants very much to build more homes in high-demand locations, but we have a whole set of policies that make it virtually impossible to add housing," said Jenny Schuetz at the Brookings Institution. Justin Sullivan/Getty Images

"The market wants very much to build more homes in high-demand locations, but we have a whole set of policies that make it virtually impossible to add housing," said Jenny Schuetz at the Brookings Institution. Justin Sullivan/Getty Images
Listen Now

It’s not a secret that there’s a housing shortage in this country. On Thursday, the National Association of Realtors said in a report on metro housing that the lack of homes for sale made homeownership even less affordable in the final quarter of 2021. The median home price went up to $361,700, nearly a 15% annual increase. Prices were up even more in coastal cities like San Francisco and Portland, Oregon.

What can be done? Jenny Schuetz, a senior fellow at the Brookings Institution, considers some possibilities in her book, “Fixer Upper: How to Repair America’s Broken Housing System.” Schuetz spoke with “Marketplace” host Amy Scott about possible solutions. The following is a transcript of their conversation.

Amy Scott: I want to focus on two of the solutions you proposed because they sound so simple and they look great, but in practice, they’re really, really hard. And the first is, we need to build more homes where people want to live. So let’s start there. What do you mean by that? And how do we do it?

Jenny Schuetz: We just need to build more homes in places that have strong job markets. So this includes a lot of our big metro areas, most of the West Coast, New York, D.C., Boston. And even within metro areas, if we look across neighborhoods, some of the neighborhoods that have, for instance, the best public schools, that have great access to transit, these neighborhoods are in high demand but they build almost no additional housing. And this is not a reflection of the market. The market wants very much to build more homes in these high-demand locations, but we have a whole set of policies that make it virtually impossible to add housing in a lot of these places.

Scott: And where did those policies come from? They’re mostly local, right? And they’re driven by existing residents who really don’t want to see their communities change.

Schuetz: Exactly. There’s a whole system of land use regulations which are adopted by cities and counties that put rules on where you can build housing, [and] what kinds of structures you can build. And another piece of that is that local governments give current residents a lot of access to the development process. So if a developer wants to build a new apartment building, or a couple of new houses, they have to go in front of a community meeting where the existing neighbors get to show up and say: I don’t want more homes, I don’t want more cars in my neighborhood, I don’t want more kids in my kids’ school. And the existing neighbors essentially have veto power to block new housing in these places where lots of new residents would like to live.

Scott: One of the fundamental challenges you talk about is this perverse incentive that homeowners have to fight new housing in their communities because they benefit from scarcity through higher property values. Is it about changing that mindset? Or is it about basically forcing them, and the government stepping in?

Schuetz: Well, we could change their financial incentives in a couple of ways. One is that home equity is the largest single financial asset for most middle-income households, which makes them very protective, and they resist anything they think might push down their property values. And other countries have invested more in, say, public pensions that would make people less sensitive to their property values. The other financial incentive is that property taxes on people’s homes are used to pay for things like schools and parks and roads. So local governments themselves have an incentive only to allow high-value homes to be built. Essentially, what we need to do is change the financial incentives and think a little bit more at the regional level, or the city level, because it turns out that some of the policies that are really popular with local voters are actually terrible for the region, for the state, even for the country.

Scott: I want to go back to solution number two that I mentioned up top, which is not just building houses where people want to live, but building fewer homes where we shouldn’t be building. And that gets into the perils of climate change, which we’ve been seeing play out all over the country. Can you talk about how the federal government incentivizes building in the wrong places, and how we solve that?

Schuetz: Yeah, we have a really complicated and difficult-to-understand housing finance system and insurance systems. And all of these diffuse the incentive, diffuse the financial risk that comes from climate change, so nobody has an incentive to avoid building in high-risk places. If somebody buys a home on the beach and it gets hit by a hurricane, some of the losses get borne by the homeowner, some of them go back to the mortgage lender, but a lot of the mortgage lenders have sold the mortgage to investors. And it turns out that a lot of those were actually backed by the government-sponsored enterprises, Fannie Mae and Freddie Mac. It turns out that taxpayers are actually bearing some of the cost from that damage.

Scott: Are there enough good places to build?

Schuetz: That’s a good question. I mean, some of the the safer places to build, for instance, in California, we shouldn’t be building on what they call the wildlife-urban interface, in the hills that are most prone to fire. We should be building in places like downtown San Francisco, because that’s all concrete and that’s much less likely to have a wildfire. Think of all of the surface parking lots that exist in cities. If you build apartments, on top of that you could accommodate a lot more people rather than constantly pushing out into the suburbs, where we have much bigger carbon footprints, and pushing out to the edges of cities where we run into fire risk and flood risk much more often.

Scott: You write that reforming our current housing and land use systems will shake up the groups of winners and losers, which is a hard sell, politically, getting anyone to give up something, right? What do you think it’s going to take?

Schuetz: Well, we’re seeing a lot more interest across the country at state and local levels in doing some sort of reform of zoning and land use regulations. Some of this is coming from, I think, a generational push. Lots of millennials think that they will never be able to buy a house because it’s just getting too expensive and going further out of reach. But part of the reason, also why I wrote the book, is that I want financially comfortable suburban homeowners to realize the system isn’t working out well for them as it is. They are paying these costs through climate change, through the cost of not providing a decent living environment for lots of kids. So, you know, even if you feel like personally you benefit from the system, it’s not really as rosy a picture as you think. And there are outcomes that could make things better for a lot of us.