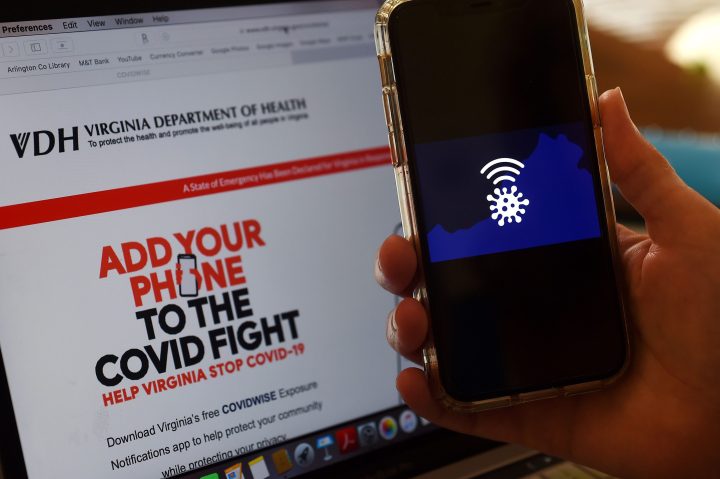 COPY
A COVIDWISE logo is displayed on a mobile phone screen on Aug. 6, 2020, in Arlington, Virginia. OLIVIER DOULIERY/AFP via Getty Images

A COVIDWISE logo is displayed on a mobile phone screen on Aug. 6, 2020, in Arlington, Virginia. OLIVIER DOULIERY/AFP via Getty Images
Listen Now

Early on in the pandemic, Google and Apple collaborated on exposure notification technology that individual states could use to build apps.

About half of all states took them up on it, and those apps are supposed to tell users when they’ve been in close contact with another that tested positive.

However, they haven’t quite caught on.

When these apps were first being developed, Jessica Vitak was paying close attention. She’s a professor of information studies at the University of Maryland and a self-described privacy zealot.

“Privacy and security needed to be at the forefront,” she said.

And she said they were at the forefront of Google and Apple’s technology. It uses encrypted bluetooth data, rather than GPS location data, to keep track of which users have been in close contact.

“I mean I added the one for my state, and I had no concerns about doing so,” she said.

Vitak said it’s all the other apps on your phone that are spying on you. But in some states, uptake rates never broke the single digits.

The U.S. Government Accountability Office looked at whether these apps are worth the millions spent developing and marketing them.

The GAO’s Karen Howard said those tight security measures may have actually backfired.

“Because the states have so little data about who downloaded the app, where they were located, whether they got a positive test, whether they input that test result …,” she said.

And without that data, it’s hard to measure whether the apps are effective

“Or whether they could be effective with tweaks,” she said.

But some tweaks are exactly what these apps need, said Joana Masel at the University of Arizona.

“So it’s often been described as building an airplane while you’re flying it,” she said.

In other words, we shouldn’t throw in the towel after a rocky first attempt during a pandemic.

And she said the tech giants involved could help with some modifications, like putting the technology on all smartphones and giving users the choice to opt-out.

“And then you’ve instantly solved the adoption problem,” Masel said. That also makes the app friendlier to scientific research.

“Even if the technology failed to completely stem transmission, it would still gather data that would be invaluable,” she said.

Google declined an interview request and Apple didn’t respond to one.

Masel said we’ll want these apps in better shape for the next COVID variant – or the next pandemic.