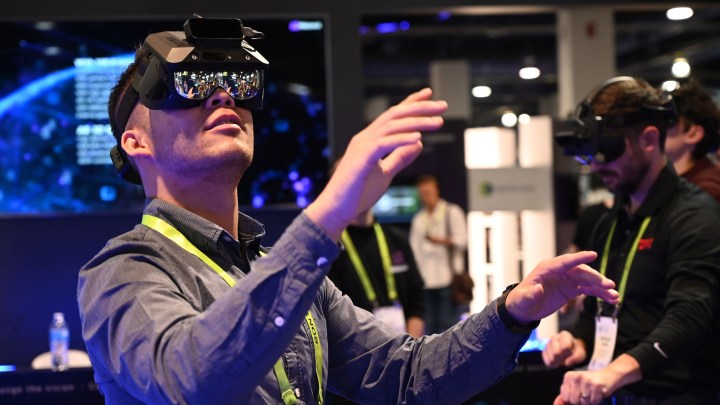 COPY
Though the technology for widely-used augmented reality glasses isn't quite there yet, companies are certainly working on it. Robyn Beck/AFP via Getty Images

Though the technology for widely-used augmented reality glasses isn't quite there yet, companies are certainly working on it. Robyn Beck/AFP via Getty Images
Listen Now

It’s been nearly five years since Snap Inc., which owns the app Snapchat, went public on the New York Stock Exchange. And last week, for the first time ever, Snap reported a quarterly profit.

The company also said that 319 million people are now using Snapchat on a daily basis, up 20% from the year before. One of the things Snap is known for is augmented reality — as in, using a device to add something to what’s actually there. And Snapchat’s growth could be a sign of an augmented future.

During the pandemic, lots of people tried augmented reality. Though not always on purpose. Remember the lawyer in Texas who accidentally got a kitten filter stuck when he appeared virtually in court?

He did eventually figure out how to get the cat filter off and it’s a good example of how people became willing to experiment, according to Forrester analyst James McQuivey.

“The pandemic really put everyone in a place where those tools became front and center to how they lived their lives,” he said.

Now, there’s more demand for those tools. Augmented and virtual reality designer Andre Elijah, who runs his own studio, said his work has evolved from creating games for companies like Snap and Fortnite to helping people shop.

“Now it’s turned into a digital storefront where you can do virtual trials of clothes and press the button and order them,” Elijah said.

That kind of augmented reality has a lot of business possibilities.

“It allows people to see a new layer of understanding around what they might buy,” said Joseph Turow, a professor of communication who studies marketing and digital media at the University of Pennsylvania. “I think companies are trying to figure this out.”

“They have a museum called the Delta Flight Museum that showcases their history and experiences with old aircraft,” he said. “So we are launching the augmented reality app that assists when you visit the airline to bring those exhibits to life.”

So, when people visit the museum in Atlanta, they can view an actual plane, hold up their phones and see a virtual Delta pilot or flight attendant start talking to them.

But people may not always be tied to their phones, which is why companies are working on augmented reality glasses.

“I don’t think we’re there yet. I don’t even know that we have the BlackBerry of these devices yet. We’re in the Nokia stage, let’s call it that.”

That is to say, it’s still early days. McQuivey said that once those augmented reality glasses are good enough, we might wear them all the time.