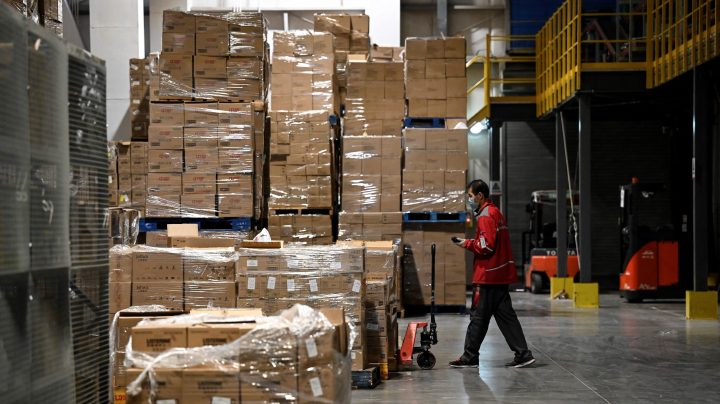 COPY
Lockdowns could affect the operations of the tech industry and Chinese ports. Jade Gao
COVID-19

Lockdowns could affect the operations of the tech industry and Chinese ports. Jade Gao
Listen Now

About 20 million people in China are in lockdown as the country tries to contain the omicron variant of the coronavirus before it spreads beyond control. Most of them are in the city of Xi’an in the west and Henan province in eastern China. Several port cities, including Shanghai and Shenzhen, have imposed limited lockdowns.

As China tries to enforce zero-COVID measures, supply chain watchers are growing increasingly concerned about the flow of goods from the country’s factories.

​”What’s happening in China right now is the most serious COVID-19 surge since the original outbreak in Wuhan,” said Sam Scarpino, the managing director of pathogen surveillance at the Rockefeller Foundation’s Pandemic Prevention Institute.

​The aggressive policy has worked well so far, according to Nargiza Salidjanova, director of the China projects team with the Rhodium Group.

​”When there is an infection detected, there is a mass lockdown, which disrupts huge cities, massive population. It affects factory production,” Salidjanova said.

“And it just so happens to be that the cities and provinces are a major supplier for computer chips, tech products. There’s a lot of ports that are being disrupted,” said Brendan McKenna, international economist for Wells Fargo Securities.

​China’s options are complicated for a few reasons.

The Lunar New Year and the Olympics are coming up, making controlling omicron a priority. And China’s population may be relatively vulnerable.

Some evidence suggests that the homegrown Sinovac vaccine is less effective than other vaccines in producing antibodies that neutralize omicron, according to Scarpino. Taking these factors together, it makes for a very complex situation.

​”What makes it harder to predict is what kinds of measures are coming tomorrow to try and control the spread and how many people are going to be affected by those,” Scarpino said.

​There is a sense that disruptions are coming — delayed products, thwarted deliveries, continued inflation — but they may take a while to arrive.

​”I think it’s probably going to take at least a month, possibly two, for the disruptions and the way China is handling the COVID outbreaks to actually show up in economic data and for financial markets to actually respond to that,” McKenna said.

On the other hand, companies do have some experience dealing with disruptions. Chad Fleeger heads the supply chain practice at accounting and advisory firm BDO.

​”This time around, them being proactive and getting out in front of the problem will shorten the back end of how long it could last,” Fleeger said.

​Either way, the supply chain problems we thought were coming to a close may well go on a while longer.