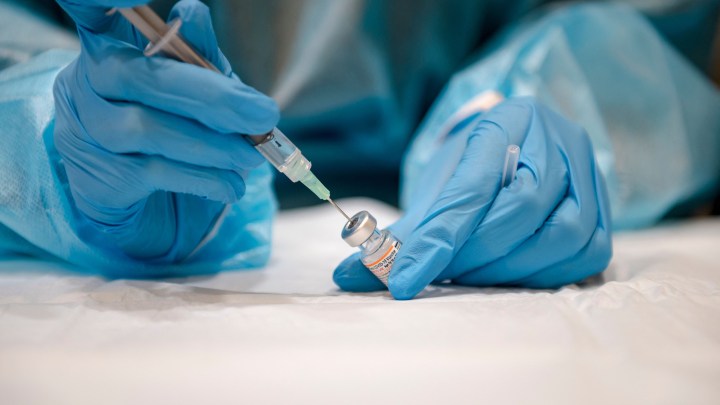 COPY
A nurse prepares a COVID-19 vaccine in Montreal, Quebec. The province is planning to impose a tax on the unvaccinated. Andrej Ivanov/AFP via Getty Images

A nurse prepares a COVID-19 vaccine in Montreal, Quebec. The province is planning to impose a tax on the unvaccinated. Andrej Ivanov/AFP via Getty Images
Listen Now

In the Canadian province of Quebec, which has seen the highest number of COVID deaths in the country, officials say there’s been a dramatic uptick in the number of COVID-19 vaccine appointments this week.

They say that spike is likely driven by an announcement that the province will impose financial penalties on people who have yet to get their first dose, unless they have a medical exemption.

This comes as Quebec prepares to reopen schools and lift a curfew put in place at the start of the year amid the spread of the omicron variant. So much for using gift cards, baseball tickets, and cash giveaways to entice people to get the vaccine.

When announcing it this week, officials there said while just 10% of the population hasn’t gotten their jab, the unvaccinated make up about half of those in ICUs in the province, straining health care resources.

“They put a very important burden on our health care network. I think it’s normal that the majority of the population is asking that there be a consequence,” said François Legault, Quebec’s premier.

While not offering his explicit blessing for a tax, Canadian Prime Minister Justin Trudeau said provinces are right to try new ways to get more people vaccinated: “Whether its requirements for travelers or requirements for public servants to be fully vaccinated, we have taken strong measures in the past and they have worked.”

It’s not clear how high the tax will end up being .or when it will take effect. But officials said it would be “significant.” As details are worked out, the idea is getting mixed reviews.

“It feels very authoritarian to have the provincial government make these kinds of announcements. Quebec does that sometimes, and I don’t like that,” said Carolyn Ells, an associate professor of biomedical ethics at McGill University in Montreal. “It’s just not equitable to just give everybody a flat rate; there are social-economic circumstances that contribute to that.”

And there’s the legal question: Can the government do that?

There’s no doubt — Quebec has the authority, according to professor David Duff, who teaches tax law on the other side of Canada at the University of British Columbia.

“That’s the beauty of a tax regime. It’s not forced, it’s just imposing a cost that is a cost that people who have chosen not to be vaccinated are imposing on others,” he said.

No matter how onerous a “tax” sounds, Duff said people would still have a choice whether to comply with the rules or pay up.