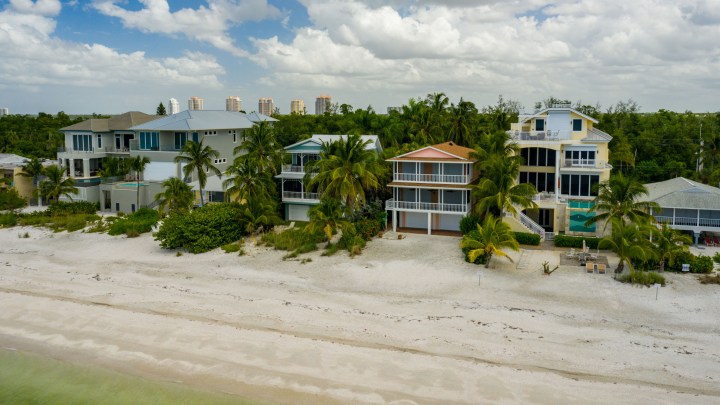 COPY
Upfront fees for some second-home loans could increase by as much as 3.9% starting in April. Above, beachfront vacation homes in Florida. felixmizioznikov via Getty Images

Upfront fees for some second-home loans could increase by as much as 3.9% starting in April. Above, beachfront vacation homes in Florida. felixmizioznikov via Getty Images
Listen Now

It’s getting a little more expensive to take out a mortgage. This week, Freddie Mac said the average interest on a 30-year fixed-rate mortgage crept up to 3.22% — still very low. But this time last year, that rate was a record-low 2.65%.

For those in the market for a second home, costs are going up even more, thanks to higher fees coming in a few months.

Demand for second homes has gone through the roof in the last couple of years, as newly remote workers seek more space and better scenery.

“There is a long-term trend that we’ve seen of second-home purchases increasing,” she said. “I think part of that just goes along with wealth inequality in the rich getting richer and being able to buy more second homes.”

Soon, they’ll have to pay a little more for those homes. This week, the Federal Housing Finance Agency announced it’s increasing the upfront fees for second-home loans sold to Fannie Mae and Freddie Mac by as much as about 3.9% starting in April.

Redfin estimates that’ll cost a typical buyer an extra $13,500 on a $400,000 home. Fairweather said regulators may be trying to get a handle on what could be an emerging bubble in the housing market.

“If a whole lot of people are buying up second homes with the belief that it’s a great investment because the value will only go up, that can turn into bubble behavior,” she said.

Fees will also go up on certain high-balance loans with exceptions for first-time buyers. Fannie and Freddie have a mission to help make homeownership more affordable, said Guy Cecala with Inside Mortgage Finance.

Propping up the market for second homes isn’t exactly helping.

“They should be focusing their resources on low- and moderate-income borrowers, and that’s the reason for doing it,” he said.

Demand for second homes is likely to remain high, according to Dean Tucker, a mortgage broker in Boise, Idaho.

“I don’t think that it’s going to slow that market down. Second homebuyers are typically more affluent,” he said. “And if that’s the cost of getting a second home, that’s the cost.”

Buyers can always borrow in the private market. And a lot of them don’t even need a mortgage — they pay cash.