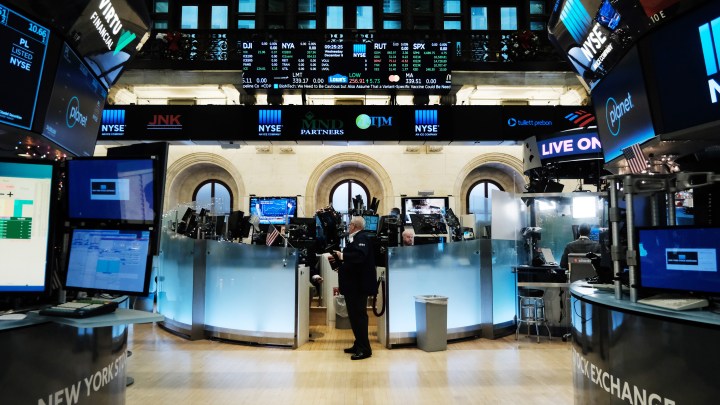 COPY
Economists think inflation is likely to persist in 2022. To what extent? That's harder to say. Above, traders on the floor of the New York Stock Exchange on Dec. 8. Spencer Platt via Getty Images

Economists think inflation is likely to persist in 2022. To what extent? That's harder to say. Above, traders on the floor of the New York Stock Exchange on Dec. 8. Spencer Platt via Getty Images
Listen Now

Inflation is running hot for the first time in decades and economists expect it will only climb higher.

Nobody will say that predicting inflation a year out is easy. “Making a forecast that is reliable, you have to be very, very humble,” said Harvey Rosenblum, a professor at the Cox School of Business at Southern Methodist University.

Rosenblum would know — that forecasting was part of his job for some of his 43 years at the Federal Reserve Bank of Dallas. The pandemic, and the fiscal policies that have come out of it — like federal stimulus checks — have made predicting more difficult.

“The willingness to print money, if you will, and lean on central banks to finance government deficits has been a global phenomenon,” Rosenblum said. That’s a major factor driving inflation and will be for the next several years, he said.

“I think we’ll be saying that inflation is lower than it was when we exited 2021, but that it remains higher than what we were experiencing before the pandemic,” she said.

Desjardins expects it will still be hard to get people back to work, prompting wages to keep rising. “As a result, that will keep price pressures a little hotter than they were prior to the pandemic.”

This year, inflation has driven up prices on big-ticket items like rent, vehicles and food, according to Ryan Wang, U.S. economist at HSBC. Knowing that is helpful, but Wang said it doesn’t make the crystal ball any clearer.

“If there’s anything that economists have learned this year, it’s the ability to be surprised repeatedly and significantly,” Wang said.

Which is why Harvey Rosenblum’s advice to stay humble might be worth bearing in mind.