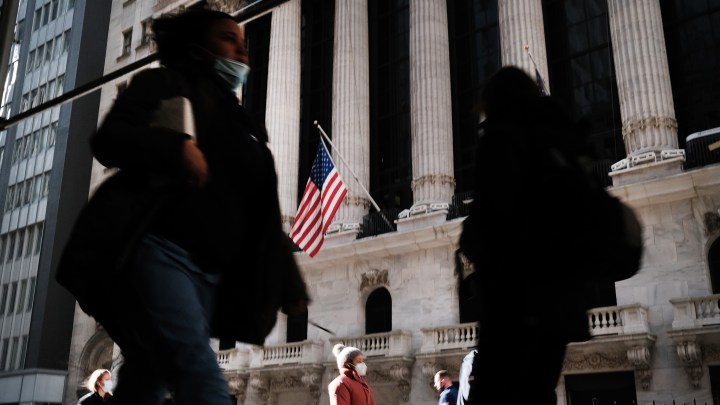 COPY
Stocks make up 30% of household wealth in the U.S. Above, people walk past the New York Stock Exchange. Spencer Platt via Getty Images

Stocks make up 30% of household wealth in the U.S. Above, people walk past the New York Stock Exchange. Spencer Platt via Getty Images
Listen Now

The Federal Reserve is set to release its quarterly snapshot of household wealth levels Thursday.

“Household wealth” does not mean “household income,” however. It means the net worth of things Americans own, including stocks and real estate.

During the pandemic, we’ve seen huge swings in household wealth linked to those assets. The wealthiest Americans may have already had them before the pandemic, and they’re betting that they’ll continue to appreciate.

But what’s in store for the rest of us and our household wealth?

In the pantheon of datasets generated by the Fed, household wealth hasn’t always received much attention. But former Fed economist Claudia Sahm said that’s changing, “because the economy is being so weird. If you look at employment, it’s weird. If you look at consumer pricing, it’s weird, right? You have to really try and put the pieces together and tell the story,” she said. “But none of us actually know exactly what the right story is.”

He was surprised that, given the current boom in the housing market, stocks make up the majority of American household wealth — at nearly 30%.

“I would have thought real estate was a bigger chunk. But the stock market run-up since roughly 2016 has had a big impact on retirement funds,” Miller said. And he expects to see more of that growth.

Economist Sahm points out that for people without big portfolios, the last year has also been a time of wealth-building — just on a smaller scale.

The federal government’s historic pandemic stimulus assistance gave people more to spend and to save, said Martha Olney, an economics professor at University of California, Berkeley. But she warns that is a temporary change.

And if savings are in cash, that wealth is more likely to disappear if inflation heats up.