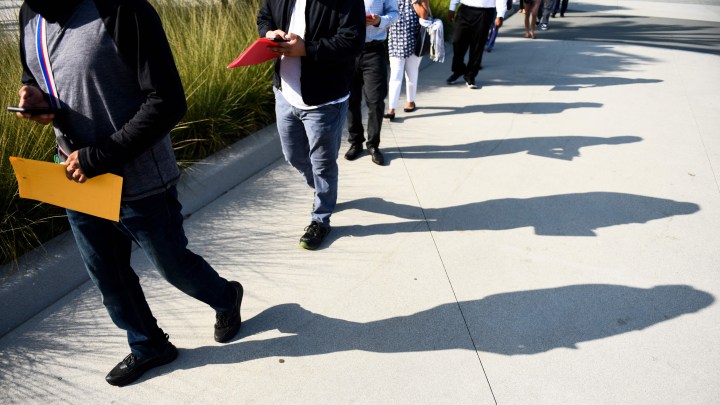 COPY
Though this week's first-time jobless claims are a historic low, the economic recovery is still volatile. Above, people line up to attend a Los Angeles job fair. Patrick T. Fallon/AFP via Getty Images

Though this week's first-time jobless claims are a historic low, the economic recovery is still volatile. Above, people line up to attend a Los Angeles job fair. Patrick T. Fallon/AFP via Getty Images
Listen Now

​A whole bunch of data about the economy was released Wednesday — a day early because of Thanksgiving — and a lot of it was positive.

​We learned that the Federal Reserve is bullish on the economy’s prospects through the end of next year. In the minutes of the Open Market Committee meeting earlier this month, the central bank’s staff predicts gross domestic product will post “sizable” gains this year and next.

​Some of Wednesday’s news was a downer — consumer confidence fell to its lowest point in a decade, according to the University of Michigan. And the personal consumption expenditures price index showed that inflation’s running at 4.1%.

​But a lot of other news was good: ​Household spending was up in October, and first-time unemployment claims were just 199,000 — the lowest they’ve been since the pandemic began.

But not just that. The Department of Labor noted that’s also the lowest they’ve been since 1969.

“My first reaction is wow,” said Mark Hamrick, a senior economist at Bankrate.

Despite his own initial reaction, Hamrick said it’s also true that a single week of unemployment numbers doesn’t really tell us all that much. Nor does comparing today’s economy to the one way back then.

“The economy has obviously been massively transformed since 1969,” he said. “And so this just tells you that it is not very often that we see a new jobless claims number that has a one handle on it.”

Even though it is just one week of data — and could well be adjusted upward later — it does fit into the big picture trend: The number of people who are unemployed is dropping.

“The recovery so far has been relatively strong,” said Gregory Daco, the chief U.S. economist at Oxford Economics. “But we are seeing a number of labor supply constraints that are preventing employment growth from being stronger.”

Those constraints are ones we’re all pretty familiar with at this point: concerns about COVID-19, child care issues and a lot of early retirements. Plus, Daco said fewer immigrants are being allowed into the United States for jobs.

“I think, on all fronts, we’re starting to see signs that some of these constraints are easing,” he said.

But the economy is still volatile. Patricia Anderson, an economics professor at Dartmouth College, said that when it comes to interpreting all of the different employment data, “I think we mostly have to guess.”

There’s still a lot that’s unclear about what is really happening in the labor market. Particularly, Anderson said, why so many people are quitting their jobs and not necessarily taking new ones.

“The short answer seems to be a lot of people more or less saying, ‘I don’t need this crap.’ The question is, how can they get away with that?” Anderson said.

And for how long? And what will it take to lure them back to the job market?