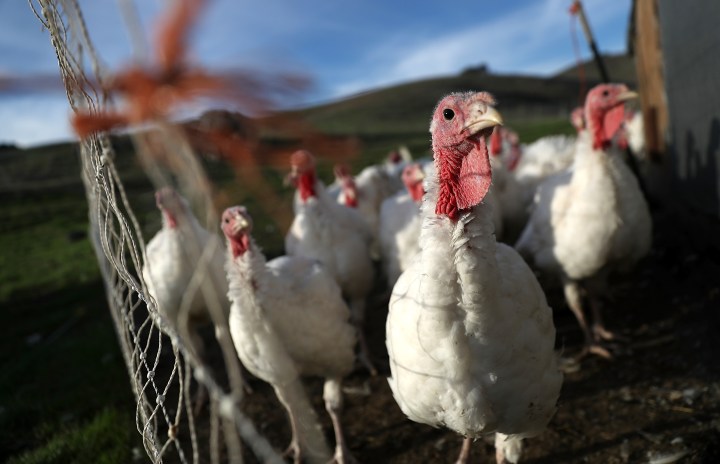 Greenberg Smoked Turkeys in Tyler, Texas, is famous for its holiday birds. But last year the family-owned company suffered a catastrophic fire less than a month before Thanksgiving that destroyed Greenberg’s cold-storage facility and wiped out its entire seasonal inventory, effectively canceling production.

“Any business would be concerned, especially a seasonal business, that if you weren’t in operation for a year that people would forget about you,” he said. “We’re going to have a better facility. And our customers are going to — I think they will come back in droves.”

We got Greenberg back on the phone to talk about how business is going this year. The following is an edited transcript of the conversation.

Sam Greenberg: Well, I was right. [Customers] are coming back in full force, and it’s marvelous. We’ve never had sales like we’re having this year for Thanksgiving. And I have no doubt it’ll carry over into Christmas.

Brancaccio: It’s kind of strange, right? I mean, in a good way, strange. Many of my economic relationships are, sadly, transactional — someone has something to sell, and if I have the money to buy, then that’s that. But it sounds like your customers feel more connected to you somehow?

Greenberg: Well, I’m not sure about that. I know we put out a good product, and it’s more of a traditional item, and it’s comfort food. And who doesn’t need comfort food in the times we’re going through now?

Brancaccio: So there was the big fire — you’ve rebuilt, that’s all done?

Greenberg: The building is complete. It’s so nice, because it’s not 40 years old; everything is where it needs to be. It’s very efficient. It’s great.

Brancaccio: I’m asking every business about this right now: How you doing on staffing? I mean, when your operation was out after the fire, you might have lost some people to other jobs, and everybody tells us hiring is hard right now.

Greenberg: We’ve had some minor issues hiring a shipping crew, because it is so sporadic as to when our shipping days are. But as far as the staff that stays here from September through December 24, that staffing was easy. We had a line of employees coming back.

Brancaccio: So a big week must be the week before Thanksgiving.

Greenberg: Last week was very large. We had several days that we had 15,000 turkeys leaving here, and we had never labeled that many outbound packages in one day. And we did it.

Brancaccio: Do you see any lessons in this ordeal that you’ve been through that other businesses that get hit by disaster might use as a guide?

Greenberg: Well, first off, have good insurance. But other than that, when you’re faced with a disaster, the sun does come up the next day. And you just have to get going and get back in business. And I was laser focused — as well as everybody out here, my full-time employees, the 14 of us — we were all laser focused on getting this building complete and getting back in business.

Turkey company to miss Thanksgiving after fire wipes out inventory