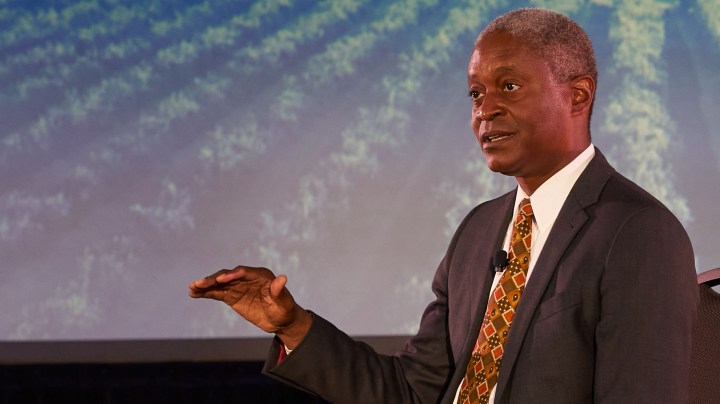 For monetary policymakers, like Federal Reserve Bank of Atlanta President and CEO Raphael Bostic, the economy recovery is well underway, but not without some some caveats.

While unemployment is at its lowest point since the onset of the pandemic and wages are increasing, inflation is at a 30-year high and has persisted at a high rate longer than some Fed officials expected. Beneath the headline numbers, there’s also an uneven recovery, with the unemployment rate for African Americans still considerably higher than the rate for white Americans.

Making sure that the recovery is inclusive has been a key issue for Bostic, who is a voting member of the Federal Open Market Committee this year. He spoke with “Marketplace” host Kai Ryssdal about the progress he’s seen in the economy, and whether everyone is able to benefit from it. The following is a transcript of their conversation.

Kai Ryssdal: What’s your sense for how the economy is doing?

Raphael Bostic: So, I think the economy is doing well. Now really what we have to deal with are the disruptions that the pandemic has put into the economy that is creating some tensions and stresses, but we’re gonna turn to that pretty quickly. And I know businesses have been working on this for quite some time. And we are as well.

Ryssdal: Not only is the Fed gonna turn to it, so am I, in about a minute. But I do want to ask you whether you’re surprised that the economy has recovered as strongly as you believe it has?

Bostic: Well, I would say the answer to that is yes. Throughout this pandemic, on a monthly basis, it seems that we’ve had to ratchet our projections up. We expected that demand would come back much slower, and it’s come back strong and stayed that way. So, I’ve been continuously surprised. And that gives me good faith and confidence in terms of what will come in the months ahead.

Ryssdal: OK, to the “stresses and tensions” as you put them, obviously, way up on top of that list is inflation. You had that speech couple of weeks ago where you made that joke about your office has a swear jar for people who use the word transitory, and you suggest maybe episodic would be a better word. I wonder, though, if the Fed as a body had a chance to do it over again, whether you might have addressed it differently, because it seems now all y’all are kind of between a rock and a hard place.

Bostic: I don’t know if I would say I would address it differently. I might have talked about it differently. The reality is that the forces that we see right now are driven by the pandemic, and that truth has not changed. At the very beginning of this pandemic, when we asked business leaders how long do they think this was going to last, they told me five or six months and we’d be good. And now we are now just about two years in, and we’re still not good. It’s just going to take longer than I’d like. Of course, I’d love this to be done now. But we’ve got to have to show some patience and some perseverance. Everything is just taking longer than I would have expected going in.

Ryssdal: The catch, of course, with showing patience and perseverance is that with all respect, easier said than done for people on the middle to lower end of the income spectrum for whom groceries and gasoline and you name it is now more expensive. And as you know, expectations about inflation are a huge factor here.

Bostic: Well, that’s exactly right. And that’s something I’ve been concerned about from the very outset. Fortunately, there’s been a lot of fiscal support that has been offered to give people a bridge to where they’ve not had as bad an outcome as they might otherwise. But we’re not done. And that’s an important message going forward.

Ryssdal: To be clear, on the whole, “we’re not done” thing, Congress is clearly done with virus-specific relief and assistance. The Federal Reserve, meanwhile, is putting itself on track to — tea leaves being read, I grant you that caveat — to begin to talk about, start thinking about, raising interest rates middleish of next year. And that is, that is raising some eyebrows.

Bostic: Well, this goes back to where we started in that the economy has come back stronger than people expected. And that’s caused me and others to pull forward our estimation of when we will be in a place where an interest rate increase makes sense. Right now, our projections suggest that by the summertime of next year, the number of jobs that we have in the economy will be pretty much where we were pre-pandemic. And at that point, I think it’s appropriate for us to try to normalize our interest rate policy. I think it would be a mistake for us not to acknowledge that evidence moving forward. But instead, we’re going to continue to monitor things as they move forward and act as appropriate.

Ryssdal: Let me take a little turn here to something that you and I talked about the last time you were on the program, year plus ago. It was a another post you’ve written about racism in this economy in the wake of George Floyd and the summer that we had last year. And you said, “racism is a yoke on this economy, it holds it back.” And I wonder, here we are a year later. Have we gotten any better?

Bostic: So, I think we have gotten better in the sense that there’s a much wider and broader awareness of the ways that the economy is constraining people of particular racial backgrounds and ethnic backgrounds. That awareness is a precondition for us to actually go and do things to start to make that change. And one of the things that we are doing here in Atlanta is working and engaging the business community, where we’re asking business leaders to look at their policies and programs to make sure that they are not contributing to the disparities and the barriers that we’ve seen historically. I’m very confident that moving forward, more and more businesses are going to do those sorts of things. But I have to be mindful. We didn’t get here overnight. And so it is going to take some time for us to see that progress play out.

Ryssdal: Yeah, I was just gonna say, I appreciate your aspirational hopefulness, but progress on the ground sort of takes a while, you know?

Bostic: And that’s absolutely right. And I’m hopeful that we put some anchors in the ground, or I guess anchors in the ocean, to keep people focused on these issues. I’m terrible with analogies, I should just say that. Keep people focused on this so it doesn’t play out as a fad, but rather, is something that becomes part and parcel of our policy discussions and how businesses and the broader public sector infrastructure addresses these issues.

Ryssdal: Last thing, Sir, and then I’ll let you go. I don’t want to get into the Kremlinology of who the president might nominate to run the Fed, but look, are you planning on being at the White House anytime in the next couple of days?

Bostic: So, I don’t have anything on my agenda right now for that. But you know, presidents changed their mind, so you just never know how these things are going to play out.