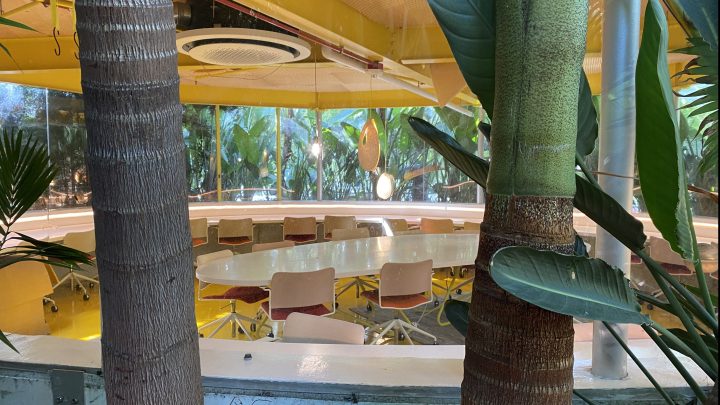 The future of the workplace in a post-pandemic world is still coming into focus, but suffice it to say many workers will have more choice about where they work.

Some office time still seems to be the preference for most, according to a recent Gallup poll. After all, sharing a workplace with kids, dogs and laundry for the last 19 months has had its challenges. Many people crave the social ties and collaboration of a communal setting. Yet workers have been slow to return to downtown high-rise office buildings, making space for maybe something in between.

Rodney Moreh runs SourceM, a small sustainable product development agency in Los Angeles, so he needs a space to bring his scattered team together at least a couple of days a week to review the products they work on.

“As we went into this whole weird transition from everyone working in the office, to everyone working at home and now kind of somewhere in between, employees and workers are looking for a place that if they do have to go in, makes them happy,” he said.

So he moved his company from a garden-variety office to an actual garden.

“It’s really funny whenever we’re on Zoom and someone sees our background, they’re like, ‘Are you in a tropical landscape?’ It’s like, ‘No, we’re just in our outdoor office space,'” he said. “It’s like kind of working in a little nice, calm jungle, if you will.”

It’s called Second Home Hollywood, an arboretum-like co-working space that opened just before the pandemic, where fully half the space is outdoors with desks nestled among mature monstera plants and banana trees.

“We’re walking right now through a 1 1/2-acre garden — what has been described as the densest urban forest in Los Angeles,” said Rohan Silva, the founder of Second Home. “There are 6,500 trees and plants, 112 different species.”

Second Home has several branches in Europe and plans to expand in the United States. It specializes in health-centric workspaces that don’t look like offices. Or homes, either. Maybe more like the “second home” of a fabulously wealthy jet setter who owns a tropical island — one with hospital-grade air filtration. And a Michelin-starred restaurant on-site. Seriously.

“If your office is just a kind of a sterile cubicle with dirty recirculated air and so on, it’s probably quite hard to persuade people to come in,” Silva said.

Private offices start at around $3,000 a month, while “hot desks” like Rodney Moreh uses are about $400 per person. It’s not going to fit everyone’s taste and budget, sort of like the black sesame vichyssoise served at the restaurant. Apparently, it’s a soup.

But the point is that the more going to work becomes a choice, the more workplace becomes sort of like a consumer product, said Dror Poleg, author of “Rethinking Real Estate.”

“So people will still use space. And I think people will pay for it more than ever before — at least those that need it,” he said. “But they’ll be much more deliberate about it.”

Office spaces, he said, have historically been almost purposely bland. Think elevator music: It’s just the background, designed to offend or excite no one. But in a work-anywhere world, there are infinite alternatives.

“What we’re starting to see is the emergence of these lifestyle offices or home-like offices, much crazier types of amenities and activities,” he said.

Saks Fifth Avenue is opening a number of fashionable office spaces inside department stores, restaurants have turned dining tables into desks that can be booked on apps like KettleSpace, and hotels are increasingly adding remote work-travel packages and co-working facilities.

“Where you would have done a stodgy conference room, it was just more comfortable — let’s sit on couches, let’s talk,” said Kyle Arteaga, who runs Bulleit Group, a national marketing agency that gave up most of its office space during the pandemic. As public health conditions have improved, teams have begun meeting up again, not in offices but in hotels in destinations of employees’ choosing.

“We want that separation from home, because, you know, we’re all spending so much time there,” Arteaga said. “But at the same time, there are some benefits that we’ve kind of become acclimated to, and we want to carry that over.”

He’s planning the next all-staff meetup for February at a hotel in Washington, D.C. Whether it’ll have a Michelin-starred restaurant on-site is still to be determined.