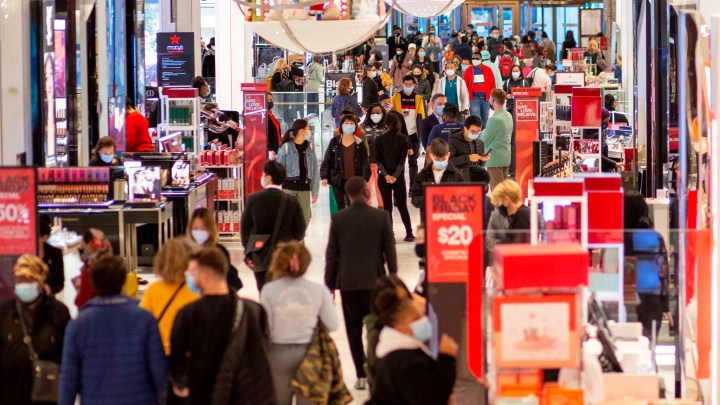 Later this morning we’ll get a read on consumer sentiment from the University of Michigan. Consumers have a few reasons to feel a little nervous right now, given all the supply chain issues going on, and the fact that inflation is rising at the highest rate in 30 years.

“And, therefore, those are sectors where consumers might be tempted to pull back a little bit,” he said.

On the other hand, Daco said household finances are still pretty healthy.

Economics professor Tim Duy at the University of Oregon said wages have been rising.

“So people have the means to spend, and they, I would say, have clearly revealed their willingness and interest in spending,” he said.

A report from the New York Fed this week found that credit card balances rose in the third quarter. Duy said that’s likely to continue.

Still, people are not going to be happy about it.

“People do not like inflation, and they haven’t had to think about inflation for many, many years,” he said.

But Duy said the biggest issue that could hold back spending this holiday season: Some things just won’t be available thanks to the congested supply chain.