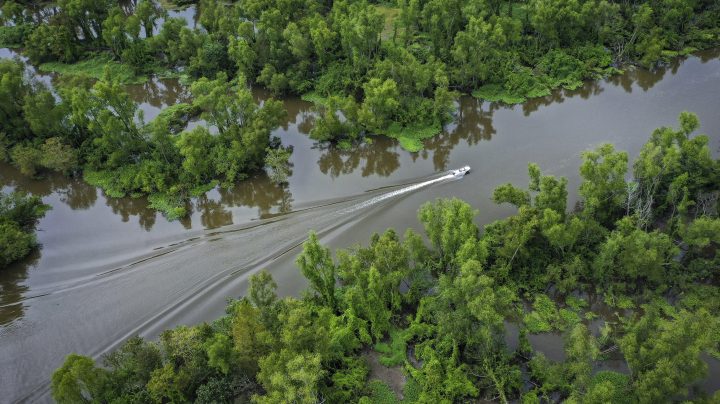 COPY
The Atchafalaya River in Louisiana is plagued by a buildup of dirt, sand and silt. As some water sources face stress, some companies have pledged to strengthen them. Drew Angerer via Getty Images
A Warmer World

The Atchafalaya River in Louisiana is plagued by a buildup of dirt, sand and silt. As some water sources face stress, some companies have pledged to strengthen them. Drew Angerer via Getty Images
Listen Now

Many companies have said they will become carbon neutral in the next few decades. Now, there’s another environmental pledge corporations are making: water positivity. Microsoft, Google and Facebook have all promised to become water-positive by 2030, as have BP and Gap at later dates.

Amanda Schupak wrote about water positivity for the Guardian. She talked to “Marketplace” host Kai Ryssdal about companies pledging to fight water scarcity. The following is an edited transcript of their conversation.

Kai Ryssdal: I need a little vocabulary help here. Water-positive — what does that mean?

Amanda Schupak: So, being water-positive means putting more water back into the environment where you operate than you take out.

Ryssdal: OK, how does that work? Because I mean, yes, I know that all water on the planet today, you know, has been around for so long, and it came through the dinosaurs or whatever. But it’s not like we’re making more water.

Schupak: Right. So obviously, you can’t just magically make more water appear. That’s not an option. So the actions that are needed to achieve these water-positive goals that companies are setting, they typically involve a combination of first, water-saving strategies, and then long-term projects that involve outside ecological or infrastructure experts to increase the health and resilience of the local watershed. And the part about the watershed is really important, and that’s because water is a hyperlocal issue.

Ryssdal: Yes, say more about that. Because that was question No. like, 3 or 4 on my list. Carbon emissions are global by their nature, right? They get blown around and this and that. Water is water where you are.

Schupak: Water is water where you are. That’s exactly the point. “Hyperlocal” means that water issues someone faces in one place may be very, very different from their neighbor in another state, or even their neighbor on the other side of that mountain ridge over there.

Schupak: Yeah. As one of my sources said to me, using water is fine. The goal is to minimize the negative impact of the water that you use. And water means different things in different places.

Schupak: There is. So the Mexico Valley watershed is in serious trouble. The water table levels are so low that the city is actually sinking. People do not have adequate access to clean water. The infrastructure is in serious disrepair. And then you have companies like PepsiCo and others who have major manufacturing facilities there. And so what Pepsi realized they have to do is, well, something, right? Like, this just isn’t sustainable. They’re trucking in water from far away in order to make sodas and snacks, and they can’t keep doing that. It’s really expensive. And it also is, like, not a great look, although that’s not how they put it to me. So what they are doing is first, they’re finding ways to use less water and then also to treat water on-site so that they can reuse water. And then they’re even taking some of that reused water and using it somewhere else. So, the example I give in the story is they have to clean out the tanks and the pipes when they’re switching from, like, Pepsi to Mountain Dew. And after they clean out those pipes, they can take that water, they can treat it, put it in a truck, go I think it’s nine or 15 miles across town where they have a factory that makes chips. And they can use that water to clean the potatoes that they cook into the chips.

Ryssdal: Which is, on the face of it, great. And if these companies live up to their water-positive promises, that is a net positive for the environment and for humanity in a time when water is only going to get more scarce. But what’s the risk, do you imagine, that these water-positive promises and pledges become a little bit like, “Oh, we’re going to be carbon neutral by 2050,” and companies and countries are saying that, and there’s a very large grain of salt that has to be had with that?

Schupak: Oh yeah. The risk is high. That grain of salt is indeed large. I mean, it is a problem that these are voluntary pledges. And the experts I spoke to said it’s very important that we see things like milestones in between now and 2050. I want to see all the numbers in your sustainability reports. All of these things will help keep companies accountable. But at the end of the day, if they miss those goals, all they have to do is shrug.