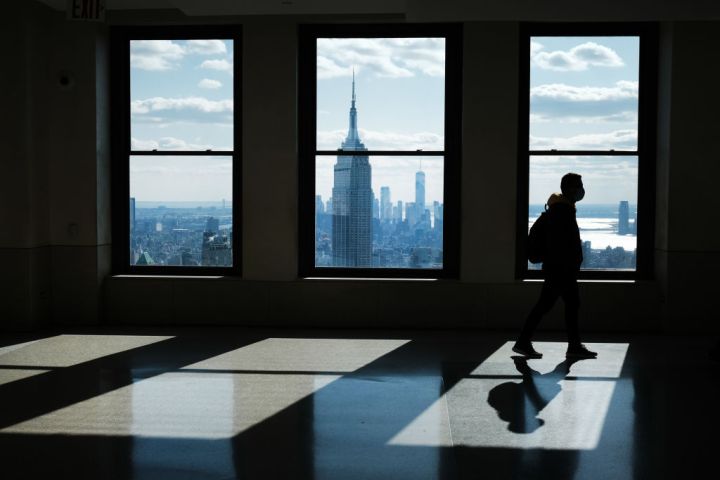 For some, the ability to work from home during the pandemic has led to questions about whether a traditional workplace is really needed to get the job done.

Take Alexis, for example. She’s an employee at a Minnesota government agency and spends a lot of her time auditing and working on spreadsheets. Work, she believes, can be handled more efficiently at home. Alexis’ last name and specific job title are being kept private because she’s concerned speaking out publicly will have negative consequences in the workplace.

Alexis is currently on a hybrid work schedule — three days in the office, two days at home. But at the workplace, there are additional distractions, she said. Some people want to chat and catch up with everyone, “which is not helpful when you’re focused on number-intensive analysis.”

Alexis spoke with “Marketplace Morning Report” host David Brancaccio about her pandemic work situation and why she would rather do the job from home. The following is an edited transcript of their conversation.

Alexis: Certainly, I think working from home is better for me. And I think it’s better for a lot of employees in similar situations. We were informed that our requirement to report to the office came from the department head. And the problem with that is, it’s not being enforced evenly across all the units. So for instance, one floor of the building could be completely empty, another floor of the building could have five or six people. Even with one quarter of the floor, there might be two or three people and certain divisions don’t report it all to the office. And for the work that I do, which is primarily focused on auditing and looking at numbers and reviewing information, that’s — there’s simply no need to be in an office setting in order to do that.

Brancaccio: What do you think accounts for the variance in who comes in and who doesn’t? It’s just who the supervisor was?

Alexis: I think personal preferences of management and supervisors plays a large role in it, yes. And certainly, in regards to the age of the workforce, in the state, state government, traditionally, in Minnesota, it’s been an older workforce that’s transitioning out. And there are norms that they’re used to. And there are practices that they expect, such as reporting to the office every day. That, they’re — it’s difficult for them to let go of. But following a pandemic, in which that was not a possibility, in which it was simply unsafe for everybody to be gathering in the same spot, we now realize that maybe everybody getting together in a building isn’t as necessary to getting our work done. And maybe there’s a different way of doing it. But it’s hard to break those habits.

In the office but still videoconferencing

Brancaccio: But when you’re saying it’s better, you know, for a person who’s doing auditing and probably looking at spreadsheets: you. Are you saying it’s better for you because it’s convenient to you or you think that for the work that actually needs to be done, the working from home is, is in a sense, better?

Alexis: The working from home is better for the work that I do. A lot of the work that I do is certainly very focused. I can spend hours at a time focusing on records that I have to put into a spreadsheet, that I have to analyze, that I have to come up with calculations and make reports on. And that’s better done when I’m not disrupted. And on the other — on the flip side of that is the cost-benefit analysis of having people come into the work, workspace. So for instance, when I’m working from home, I have far fewer interruptions. When I am in the office, there is a tendency of certain people to, to want to return to an office norm. Which is going from cubicle to cubicle and talking to everybody and, and you know, doing what I refer to as “coffeehousing.” Which is not helpful when you’re focused on number-intensive analysis. So at home, I’m just able to simply focus better. In addition to that, if there are meetings, because of COVID, because of the delta variant and how it’s been spreading, we are still required to wear masks in the office. And all meetings are still held via [Microsoft] Teams or Zoom, regardless. We’re still not allowed to be in the same room with one another. So those meetings, those Teams meetings, those Zoom meetings, those can take place on my couch just as easily as they could take place in my cubicle.

Brancaccio: Right. So even had I asked, what about the team aspect of the workplace and Collaboration 101? You’re saying in your particular space, these days, that’s not really happening anyway.

Alexis: Oh, it’s not allowed. We’re not allowed to conglomerate into a single meeting space. So no, it’s still all virtual, even when you’re at the office.

Brancaccio: Let’s spare a thought, though, for the manager, right? They need to manage for accountability. How can they be sure that, not you, but let’s say someone is not sitting around playing sudoku for much of the day?

Alexis: Well, certainly guardrails have been put in place since the start of the pandemic. Remember, this has been going on for over a year now. And many of us worked from home for more than 12 months. And while it took many years for the department to get to the point where they agreed, “Oh, it turns out, we can work from home,” they were very, very quick and coming up with solutions to making sure people were staying on track. So of course, there’s requirements to keep your calendar up to date. There’s of course requirements to make sure that you remain active on Teams. There are certainly requirements also to have your computer on at all times so that our information technology department can monitor that there is work going on. There has been questions and certainly concerns. I think a lot of employees as well as managers were concerned about the perception that because they were working from home, what they were doing would be perceived as blowing off the work and going to do the laundry instead. And at least anecdotally, from the people I work with in my immediate unit, that certainly has not been the case. In fact, I’ve been more productive from home.

Brancaccio: Think so? Maybe even putting in more hours?

Alexis: I think the hours that I put in have been better used. Specifically, one aspect that I have thought about since returning to work in July is the amount of time and preparation that just goes into preparing to go to work. And that includes, in the mornings, waking up, if you’re going to work out, you have to build in additional time in the morning to get up and go work out. You have to make sure that you have time to prepare food to take with you to work. And then there’s that blighted trip to work that you have to make every day. Your commute could be anywhere between 15 to 30 minutes long. And those are hours out of your day that you could be using elsewhere. And the fact is when you get up in the morning and you make coffee and you sit down and you just get to focus on the work in front of you, that actually makes it a lot easier to do the work and settle in.

Brancaccio: So where does it stand now for your work? Are you stuck going in?

Brancaccio: Yeah, you must miss some of the hurly-burly, some of the, the what did you call it? Coffee? What did you say? It was a great term.

Brancaccio: Yes. You must miss some of that. I mean, you know, not all of those interactions are totally lame.

Alexis: Not all of them. But again, with regards to collaborating with my co-workers, which is a very important part of the job that I do, if I hit a roadblock on how I’m analyzing something, if I can’t seem to figure out how to work through something, I still reach out to my co-workers. That’s still an availability. There’s certainly chat on Teams, there’s certainly text messaging through your phones. And that still certainly happens all the time. And in fact, I’ve become closer to some of my co-workers since the pandemic primarily because we were working remotely and it made the possibility, it made the reality of having to reach out and make it intentional a requirement of my job. So there is some of the, there is certainly the social aspect. But the social aspect hasn’t died, it’s just changed.

David Brancaccio: Isn’t that interesting, though? Right? The intentionality can make up for some of this, right?

Alexis: It’s very interesting. And I think that’s been one of the more satisfying parts of working from home, is having to take the time to get to know the people that are going to be most helpful in your position. And that’s something that I’ve certainly worked on. I’m not naturally a social person. But I also realize the limitations of my work. And I also realize the limitations of my knowledge and that the only way I’m going to get better at my job is by talking to people who might have a different perspective. And that’s been integral to my job. And it’s helped me to cultivate intentional and extremely beneficial work relationships.