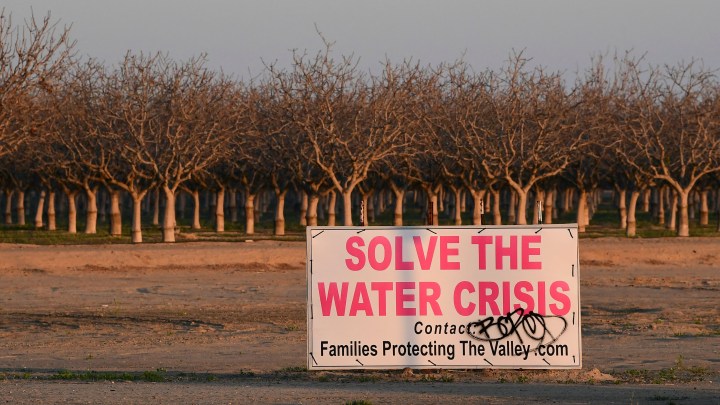 COPY
A water crisis sign is seen in California's Kern County, one of the top agriculture-producing counties in the San Joaquin Valley, in April 2021. Frederic J. Brown/AFP via Getty Images

A water crisis sign is seen in California's Kern County, one of the top agriculture-producing counties in the San Joaquin Valley, in April 2021. Frederic J. Brown/AFP via Getty Images
Listen Now

Two members of Congress have joined the governors of 10 states in asking President Joe Biden to issue a major disaster declaration over drought conditions.

​According to the U.S. Drought Monitor, 98% of the West is experiencing drought, with 60% in extreme drought conditions.

In 30 years of ranching in the Sierra foothills in California, Dan Macon said he’s never seen it this dry.

“As a consequence, we have a lot higher expenses in terms of feed purchases and hauling water to livestock and those types of things,” Macon said.

Many of the ranchers Macon works with through the University of California Cooperative Extension are selling cattle and sheep, because it didn’t rain or snow much this winter and now there’s not enough grass for them to eat or water for them to drink.

This is happening all across the West and as far east as North Dakota.

“It’s certainly an agricultural disaster,” said Daniel Sumner, a professor of agricultural economics at the University of California, Davis.

A federal disaster declaration, he said, could free up funds to help ranchers ship cattle further east, where there is grass for them to graze on.

“Or it may be the case, ‘Here’s the funds you need to bring in loads of alfalfa hay from somewhere where they don’t have a drought and ship it in’ — and that’s not something that a ranch could seriously consider. They just don’t have the money for it,” Sumner said.

A federal disaster declaration is critical right now, she said.

“We really have to think of how we stabilize the short-term situation … so that we can really understand how to address the more systemic issues, given this new future, and the fact that the new future is now,” Ho said.

The infrastructure package currently making its way through Congress includes about $8 billion in funding for water and drought-related projects.