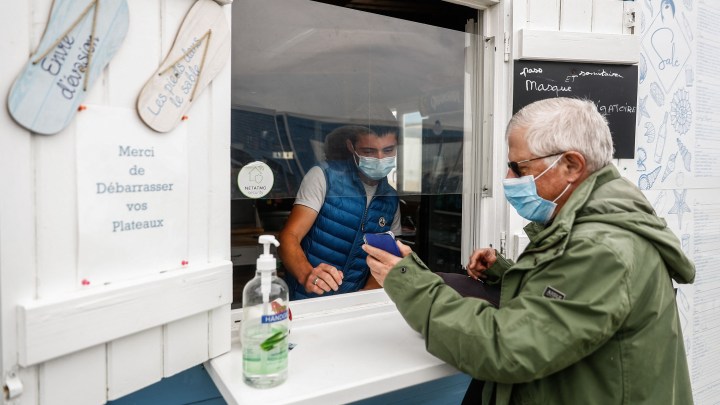 COPY
A man shows his health pass to a vendor before sitting at a coffee shop in Benerville-sur-Mer on July 27. Sameer Al-Doumy/AFP via Getty Images
COVID-19

A man shows his health pass to a vendor before sitting at a coffee shop in Benerville-sur-Mer on July 27. Sameer Al-Doumy/AFP via Getty Images
Listen Now

France is introducing a “health pass” to stop people who haven’t had their two jabs from going to cafés, restaurants, museums, cinemas or swimming pools, or from using some forms of transportation. What do business owners and their customers think about the idea?

In the Geox shoe store in the small town of Rambouillet, a customer tries on a pair of block-heeled sandals. It’s in the Bel Air shopping center, one of the large malls that the government says must be for vaccinated people only from August 1. The customer, Stéphanie Chastelloux, is a nurse.

“Long live the health pass!” said Chastelloux, who, like the others interviewed for this story, spoke in French. “You have the right not to get vaccinated but not to stop other people [from] getting on with their lives. Shopkeepers need to work, and we need to be able to treat other medical conditions than COVID.”

Store manager Fabrice Morland said the pass was a necessary constraint to stop the succession of lockdowns. The store was closed half of last year, he said: “A catastrophe. I don’t want to go through that again.”

But Morland could lose customers. Like Thibault de Boisfossé, one of France’s many anti-vaxxers.

“Show a pass in order to drink a beer with your friends? In France? The so-called country of liberty, equality, fraternity? I’m giving up going to restaurants. I’ll boycott cafés. We can eat with friends around each others’ houses. And shop in small stores, not supermarkets,” he said.

Some business people say applying the new rule will be difficult. At the Industrie café in the historic center of town, owner Stéphane Romagnolo said controlling customers’ vaccination papers was a job for the police, not for business owners like him.

“And what are we supposed to do if there’s one person hasn’t been vaccinated at a table of six? We’re going to lose business, that’s for sure,” he said.

For the government, though, the measure is already proving a success. The day after President Emmanuel Macron announced the vaccine requirement, a record 800,000 people went to get vaccinated.