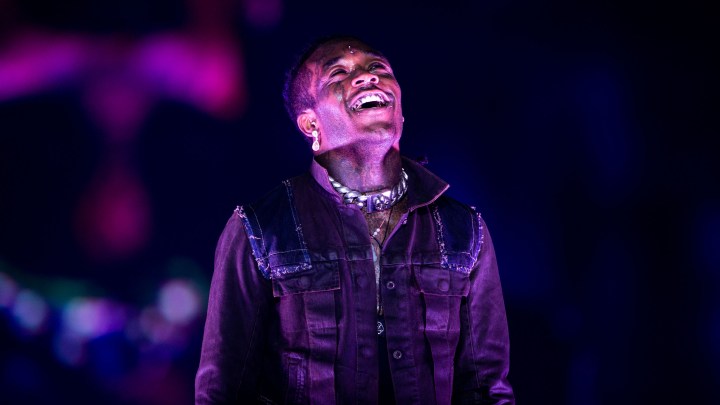 The new economy of space

It’s true what they say: the real estate market is incredibly hot right now. Apparently, even beyond the reaches of the Earth’s atmosphere.

According to a Twitter exchange between musicians Lil Uzi Vert and Grimes last week, the rapper is “still working on” the purchase of a gaseous giant.

The planet in question, called WASP-127 b, is more than 1.3 times the size of Jupiter. If Lil Uzi Vert were to ever close on the deal, it would technically be the largest real estate transaction in history.

Why exactly Lil Uzi Vert would ever want to actually buy a planet may be a bit vexing for some. One artist’s interpretation shows it as cotton-candy in color, but no one actually knows what it looks like. And, as with all gas giants, the rapper couldn’t actually stand on the planet’s surface.

Plus, it would involve a killer commute. If Lil Uzi Vert were somehow able to take one of his roughly 10 cars and travel at a safe but steady 60 miles per hour, he’d get to his new property in roughly 6 billion years, per NASA’s estimate. Imagine getting there and remembering you forgot something at home.

Needless to say, the Twitter exchange prompted questions about the veracity of Lil Uzi Vert’s claim, which is … suspect, to say the least.

Who the heck buys a planet? Who the heck sells a planet? Why would Lil Uzi Vert want to own an interstellar body that would take more than 5,000 years to travel to? (That’s if, by one estimate, he was traveling at the current theoretical spacecraft speed limit: 10% the speed of light.) How much would it cost? Could there perhaps be a wiser way for Lil Uzi Vert to use his money?

All of these questions are of profound scientific and existential significance. So Marketplace put some of them to Jim Bell, a professor at Arizona State’s School of Earth and Space Exploration and former president of the Planetary Society.

Could Lil Uzi Vert actually ever own a planet?

Also no. At least according to international space law, Bell said.

“I mean, we’ve sort of agreed, as a civilization, that nobody can own a planet or moon or a comet or an asteroid,” Bell said. “So it would require, I think, a pretty hefty change in international law to suddenly allow folks to be owning our solar system or other solar systems.”

That’s because, in 1967, the United Nations ratified its Outer Space Treaty, which states that “outer space shall be free for exploration and use by all States.”

According to the treaty, any past, present or future sales of stars, moons, planets or asteroids are null and void.

What about those certificates you can buy that allow you to name stars?

No matter how romantic or special it may be to gift someone a part of the night sky, Bell advises not to waste your money on those.

“It’s really just for fun,” he said. “It’s not official. It’s not recognized by any of the governing bodies or scientific societies of the world. It’s really no different than some of the hucksterism that was done in the 19th century, convincing people that this is valid with a certificate.”

For years now, companies have been selling the naming rights to stars. Other companies have also sold extraterrestrial real estate. Sadly, those sales are legally for naught, Bell said.

The International Astronomical Union is the body responsible for naming stars and other celestial objects. Most of them receive alphanumeric names, like WASP-127 b. According to the IAU’s website, with multiple entities that sell naming rights to stars, there’s no guarantee that a star you pay to name hasn’t already been paid for and named by someone else.

So what do you get out of such purchases? “An expensive piece of paper and a temporary feeling of happiness,” per the IAU.

Let’s talk about the price for a second. How much does a planet even cost?

Seeing as how no one has ever actually bought or sold a planet, that’s a tough one.

One University of California, Santa Cruz professor developed a formula to calculate the sticker price of planets. That formula takes into consideration things like the planet’s temperature, age, size and other life-sustaining resources.

Per the formula, Mars came in at around $16,000. Venus was worth mere pocket change, evaluated at around a penny.

Earth’s appraisal? $5 quadrillion dollars. That’s a 5 with 15 zeros after it.

The estimated value of WASP-127 b is unclear. Bear in mind, again, that it’s impossible to actually stand on the surface of the planet — because there is none, because it’s all gas — and that it’s in a less than desirable location. (That commute!)

However, Lil Uzi Vert is known for shocking, sometimes questionable investments. Earlier this year, the rapper made headlines for a 10-carat pink diamond piercing embedded in his forehead. The cost? Around $24 million, according to Rolling Stone.

OK, but seriously. As space travel becomes commercialized, should we more seriously address concerns of space colonization and ownership?

“Look what’s going on with these billionaires now, with space tourism companies trying to eventually give everybody a chance to experience weightlessness, to experience a view of their home planet from high above,” Bell said. “Space is unifying to us as a species in that we are all living, surviving, getting by on an island in space. We all have to share this one very fragile planet.”

Technically, humans have owned parts of the moon, Bell pointed out. Just very, very small parts, like moon rocks brought back by American astronauts; they’re technically owned by NASA and were paid for by American taxpayers. And with ambitious and risky proposed treks to the surface of Mars, continued discussions may need to be had about who — if anyone — owns or is responsible for the land and settlements there.

For Bell, though Lil Uzi Vert’s tweets may just be silly fun from an eccentric celebrity, it raises important questions about what is ours to take in our solar system and beyond.

“Over the last several centuries and more, we’ve had some pretty bad global experiences of colonization, [from] acquisition to exploration in the name of nationalism, as opposed to answering those big scientific questions,” he said. “Maybe we have a chance to figure out how to not only discover if there’s other life in our solar system but how to live together with that other life in a way that’s productive as opposed to destructive.”