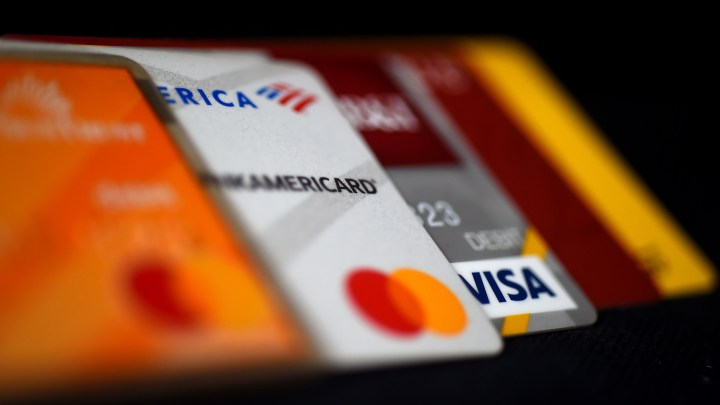 COPY
As the economy reopens, American consumers are falling back in love with plastic. Oliver Douliery/AFP via Getty Images

As the economy reopens, American consumers are falling back in love with plastic. Oliver Douliery/AFP via Getty Images
Listen Now

The Federal Reserve said Thursday that total consumer credit rose by 10% — or $35 billion — in May. That’s the biggest increase since 2016.

Lenders issued roughly 6 million new credit cards in March, an all-time record for the month and a 32% jump from last year, according to the credit reporting company Equifax.

One of those new credit card holders, Ryan Quinn, could have looked for a credit card with perks at Home Depot, Amazon or any of the other retailers he ordered from during the COVID-19 lockdown. But once the world started opening back up in February, he started thinking outside the delivery box.

“We’d like to start taking some trips and earning some points while we do that, and start saving for maybe a bigger trip we can take,” Quinn said.

Quinn and his wife switched to the Chase Sapphire Reserve Card, which has some hefty travel rewards. It has a hefty annual fee too — $550 bucks. But after a year stuck stateside, Quinn thinks it’s worth it.

“It can definitely make a dent in a nice trip to Europe one day,” he said. Or a couple of weeks in the Caribbean or Mexico.

“Everyone I speak to is ready for their next vacation,” said Tom Aliff with Equifax. “[They’re] ready to buy the things they’ve really been putting off for the last year.”

Average credit scores improved in 2020, and this means banks have more creditworthy customers.

“There’s going to be, you know, credit cards that consumers may not have necessarily qualified for in the past,” Aliff said.

Cashback cards were king during the height of the pandemic, according to Chris Dong, who writes for The Points Guy. While travel cards are enjoying a resurgence, he said many credit card companies are pivoting to “lifestyle” benefits.

“If they were really reliant on the travel as a benefit, then they were kind of susceptible to people leaving the card or trying a different card out,” Dong said.

That new card Quinn signed up for? It’s got a lifestyle benefit.

“Also, our Peloton membership is paid for for the next 6 months,” he said.

Quinn said he pays off his balance every month — so he won’t be a big moneymaker for Chase.