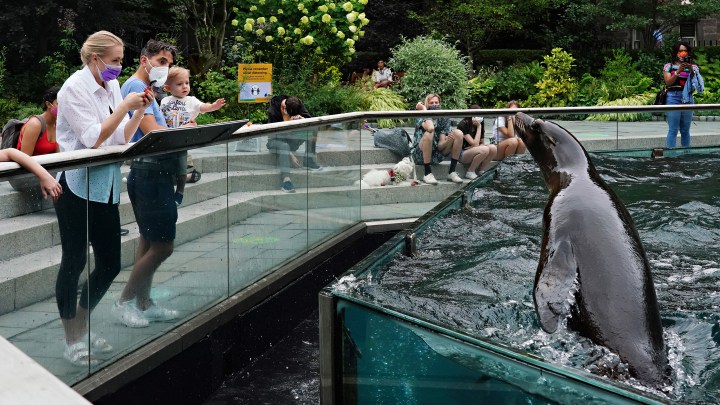 COPY
Facilities that feature animals had to keep functioning during the pandemic, even though ticket sales stopped. Cindy Ord/Getty Images
COVID-19

Facilities that feature animals had to keep functioning during the pandemic, even though ticket sales stopped. Cindy Ord/Getty Images
Listen Now

If you’re a big fan of, say, pandas, you probably didn’t get a chance to see one in person during the height of the pandemic — unless you work in a zoo. Nonprofit museums, aquariums and zoos took a big financial hit when they closed their doors this past year. That loss was particularly hard on attractions that rely on ticket sales.

The Monterey Bay Aquarium is once again open to visitors. The past year was brutal, said Chief Operating Officer Cynthia Vernon. “We lost about $70 million.”

She said that’s roughly two-thirds of the aquarium’s operating budget. And it’s not easy for these kinds of nonprofits to cut costs.

“The animals had to be cared for,” said Dan Ashe, who heads the Association of Zoos and Aquariums. “Essentially, the facility had to continue functioning at 100%.”

There are sea otters to feed, fish tanks to clean and pandas that need veterinary care. Even so, most nonprofit zoos and museums hobbled through, said Brian Mittendorf, at Ohio State University.

“They did better than the worst-case scenario that many of us envisioned,” he said. “And part of that is because other forms of revenues helped keep things afloat.”