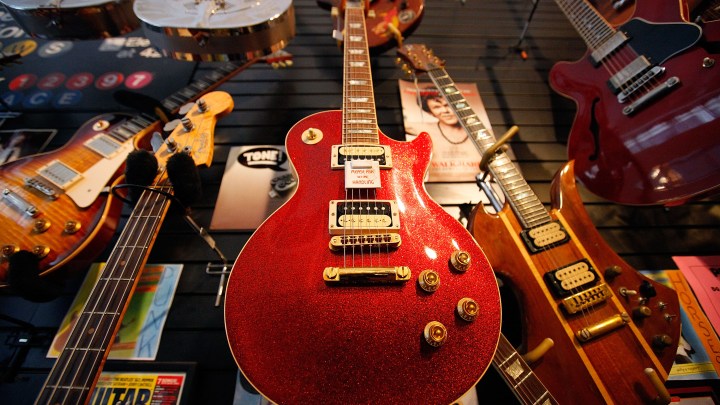 COPY
Consumer interest in guitars and other instruments has increased during the pandemic and the reopening period. Jemal Countess via Getty Images
My Economy

Consumer interest in guitars and other instruments has increased during the pandemic and the reopening period. Jemal Countess via Getty Images
Listen Now

Venues are beginning to reopen, and the live-music industry is ready to go. But the shops that provide their gear are still lagging behind.

Adam Levin is the general manager of Chuck Levin’s Washington Music Center, a family-owned store in Wheaton, Maryland. He said the store has been busier than ever because of the pandemic.

At the start of the lockdown, Levin said he was worried that the store wouldn’t survive the pandemic. He said he told the other managers to cancel any orders for expensive stuff because he didn’t know if anything would sell.

Then the orders began to flood in.

Levin said that guitars, keyboards and recording equipment have been flying off the shelves during the pandemic.

Demand grew so much, Levin had to send employees back into the warehouses to start shipping equipment out while he was running customer service from home.

However, gear began to sell faster than the store could replace it. Levin said the instruments in higher demand, like guitars, have to be finished and tested by hand to make sure every facet of the product works. When factories overseas began to shut down, due to the pandemic and the recent semiconductor shortage, Chuck’s had less and less gear to sell. Now, Levin said, his team is ordering as much as they can in bulk because shipments have slowed down so much.

Demand hasn’t slowed down since the store reopened, either. Now that more venues are presenting concerts, school music programs are meeting in person again and professional musicians are going back on tour, music stores like Chuck’s are seeing an even bigger strain on the little inventory they can get. Levin said there are back orders now that probably won’t be filled until next year.

One thing Levin has learned during the lockdown is that music still has a place in his community.

The shop “became kind of like a playground because we were open,” Levin said. “You don’t go hang out at the grocery store, but you’ll come hang out here. And that was kind of cool. That, you know, maybe people weren’t going to come in and buy something that day, but they just had to get out of their house.”