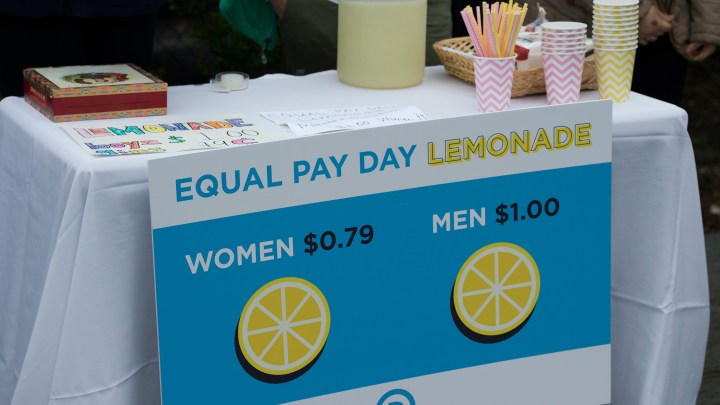 COPY
Pay secrecy policies keep women and people of color from finding out just how much less money they may make compared to their white, male colleagues. Molly Riley/AFP via Getty Images
Workplace Culture

Pay secrecy policies keep women and people of color from finding out just how much less money they may make compared to their white, male colleagues. Molly Riley/AFP via Getty Images
Listen Now

Disney is facing a new complaint in an ongoing lawsuit over gender pay discrimination. Ten women have claimed the company enforces a strict pay-secrecy policy, barring employees from discussing their salaries. Such policies have become a focus of efforts to close gender and racial pay gaps by making salaries more transparent. They’re also illegal under federal labor law and in at least 20 states. Disney denies the claim and will fight it in court, but the issue extends beyond just one company.

The rules about sharing salary details were made crystal clear at Amanda’s most recent job, with a communications company in Chicago (we’re not using her last name because of the sensitivity of the issue).

“You can’t tell anybody, that’s just the way it was. It was in the handbook,” she said of her former employer. When Amanda was hired and promoted, she never discussed her salary with co-workers until a couple of years ago, when she started interviewing for other jobs.

“I was like, ‘Not only am I underpaid, I’m being paid entry-level,'” she said. “Obviously not discussing it let them get away scot-free.”

That’s why advocates for pay equity have been fighting these policies, said Emily Martin, vice president for education and workplace justice with the National Women’s Law Center.

“One of the things about gender pay discrimination that is so insidious is that you can be a victim of it for years and years and have no idea,” she said.

That’s why talking about salaries is an important right, acknowledged as concerted protected activity. It was granted to U.S. workers in the 1930s under the National Labor Relations Act. Almost half of states have also passed their own laws banning pay-secrecy policies.

Yet, “these workplace rules — kind of informal or formal — that bar or prohibit workers from discussing their pay are incredibly commonplace,” said Jake Rosenfeld, a sociologist at Washington University in St. Louis.

In a recent paper, he found that half of workers said their employers have such policies. Companies get away with it, he said, because there’s not much penalty for violating the law. And “because it accords with a kind of general salary taboo that many workers oftentimes don’t need to be told, ‘We don’t discuss pay in this workplace.'”

But that taboo is weakening, especially among younger workers, who Rosenfeld found were nearly twice as likely as baby boomers to discuss pay.