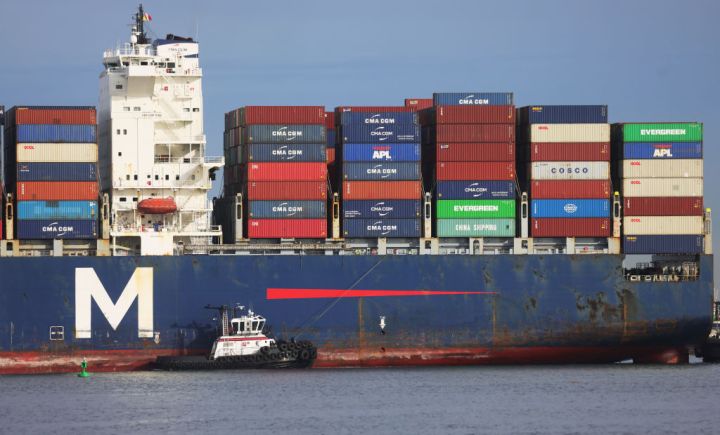 COPY
In 2020, there was “no congestion at the port. Everything was coming in early,” says Gretchen Blough. "Now it's kind of the opposite. Everything's a week to two late." Mario Tama/Getty Images

In 2020, there was “no congestion at the port. Everything was coming in early,” says Gretchen Blough. "Now it's kind of the opposite. Everything's a week to two late." Mario Tama/Getty Images
Listen Now

While business has been steady for Gretchen Blough, a customs-brokerage manager in Erie, Pennsylvania, it’s also been plagued by uncertainty.

One of the biggest issues is a shipping backlog at the ports, which is causing long delays. But there’s also a new trade policy agenda under President Joe Biden, which could lead to changes in the tariffs that the Trump administration placed on imported Chinese goods.

Her clients “keep asking me, ‘Well, when are they going away?'” Blough told “Marketplace” host Kai Ryssdal. “And I don’t have a crystal ball. I don’t know.”

The following is an edited transcript of Blough’s conversation with Ryssdal.

Gretchen Blough: Everyone seemed to think that a magic wand would wave and all the China tariffs would go away when the Trump administration left, but that’s not the case. President Biden is looking to study the effect of all of those extra tariffs on American importers because they’re the ones paying the tariffs, so no magic wand is out there to wave and send all those tariffs away.

Ryssdal: Which sounds to me like uncertainty, which is kind of like what we had the past four years in trade. Are your clients seeing that as well?

Blough: Yes. And they keep asking me, “Well, when are they going away?” And I don’t have a crystal ball. I don’t know. At least this time around, they’re planning on spending more than spending less. It still doesn’t make for good planning, but at least, you know, they might end up with a nice surprise at the end of it, if and when they do go away. So there is that if you want to look at it in a positive spin.

Ryssdal: Sure. Well, let’s do that, just because. As we look back on 2020, what was the, the trade and customs-brokerage situation? What were you seeing move? And what did you not see that you might have expected to have seen?

Blough: Well, the main manufacturers were still importing. We have one client that manufactures cleaning equipment, so they were doing really well. There was absolutely no congestion at the port. Everything was coming in early, which we never really see. We’re talking like a week to two early. Now it’s kind of the opposite. Everything’s a week to two late.

Ryssdal: Which is not good. I mean, if you’re trying to get something, I don’t care if it’s cleaning supplies, or you know, fabric for a purse that you make, that’s not a good thing.

Blough: Right. Working in the supply chain, you go to a store, you try and order something and the person that’s working there starts to explain, “Oh, well, our shipment’s been delayed, and we can’t fix what you have.” And you can tell they’re used to being yelled at. And, you know, everyone in our business kind of shrugs and says, “OK, we get it. We know.” You kind of get the look from the person or the attitude from the person on the phone, like, really? You’re not gonna argue with me? No no, I know. You don’t have to explain.

Ryssdal: I gotta love that, that you sort of can’t actually even go about your daily life without thinking about supply chain.

Blough: Everything we do is affected by the supply chain. My son’s laptop died. And I had to send it to Texas last week. And that was the last place in the world I wanted to send it to get fixed.

Ryssdal: Yeah, of course, because of the storm. To that port congestion thing, right? Part of that, obviously, is because the economy is picking up. I imagine you see indicators of economic, you know, gains and growth before those of us who are just, you know, kind of getting by in this economy.

Blough: Right. Just like we, we saw the effects of COVID before the rest of the United States. Yeah, we’re seeing a lot of the smaller importers that don’t import on a regular basis when the economy is normal starting to pick up and, you know, putting together what’s called a consolidated shipment. When they’re a smaller importer, we consolidate the shipments in one container to lower the cost of the overall shipments. It’s kind of like welcoming old friends back, where they weren’t doing much over the summer because of the situation, and now we’re seeing their goods again, which is a good sign.