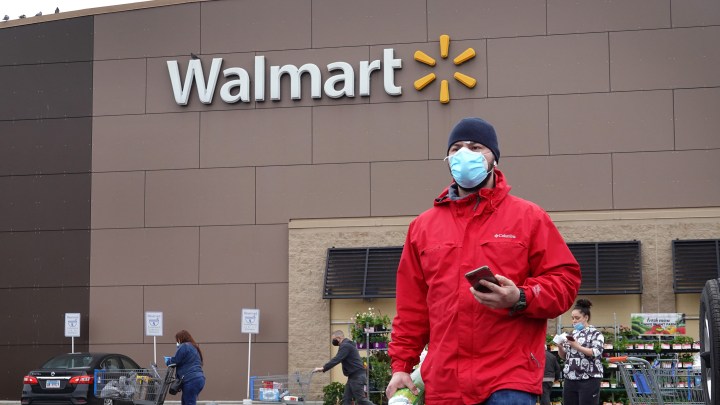 COPY
Walmart is creating a bank that may strengthen its position in retailing. Scott Olson/Getty Images

Walmart is creating a bank that may strengthen its position in retailing. Scott Olson/Getty Images
Listen Now

Walmart is on the path to expansion. Lately that’s included things like pet insurance, an array of health services and Walmart+. Now it includes banking. The retailer is partnering with Ribbit Capital, the investment firm behind Robinhood, Credit Karma and Affirm, to create its own fintech startup.

The big-box store’s expansion into banking isn’t really about banking. It’s about keeping people loyal to the brand.

“The biggest benefit of getting into this venture is to strengthen its position in retailing,” said Jie Zhang, a professor of marketing and retail at the University of Maryland.

Zhang thinks the company might encourage spending through extra discounts, rebates and rewards.

Plus, Walmart already has deep relationships with two core groups: its 2.2 million employees and its existing shoppers.

“Walmart’s core customer base primarily consists of low-to-middle-income households,” Zhang said. “Some of them don’t own a regular bank account.”

That’s about 6% of households, according to the U.S. government. Walmart already serves some of these customers with check cashing, money orders and debit cards.

Greg McBride, an analyst with Bankrate.com, said the sheer size of Walmart’s footprint and customer base means it can offer prices major banks don’t. “One thing we can know for sure: It will be low-cost.”

But Lisa Servon, author of “The Unbanking of America: How the New Middle Class Survives,” said affordable services won’t be enough. The biggest challenge for Walmart will be trust. “And whether they can transfer that trust over to financial services,” she said. “Whether that kind of trust migrates.”

That’s what Walmart is betting on — that people will want to bank where they already get their groceries, pet care and prescriptions.