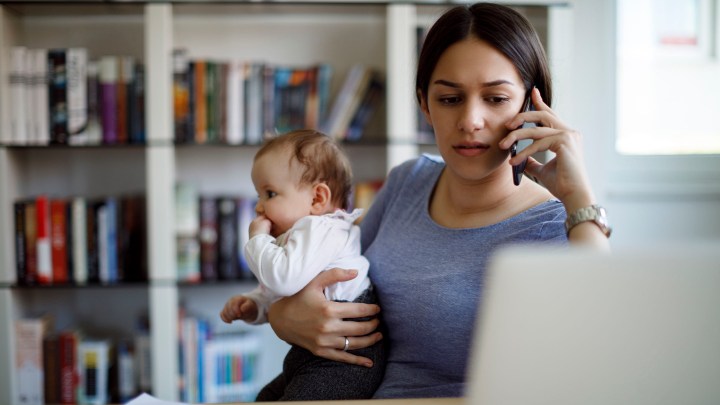 There’s yet another survey out showing that working moms in the United States are suffering from workplace burnout. This one, from health startup Maven, estimates 10 million women are struggling to juggle their responsibilities.

It echoes a McKinsey & Company report from last month. Many moms have taken on the majority of extra labor in the home on top of their jobs.

Monica Pursley is busier than ever with her job doing medical billing in Boise, Idaho. She’s working long hours from a desk in her bedroom while trying to keep her two teenage kids on task with remote classes.

“I mean, at night I cry. I cry during the day,” Pursley said. “I have a sign here that says ‘no meltdowns. Stay calm and peaceful.’ “

She’s the only parent at home, and she’s worried about money. Pursley said her utility bills have tripled with everyone home, plus she had to buy an extra laptop for the kids. “It’s been excruciating, is the word I have to use,” she said.

“It used to be that women were told not to put pictures of their kids on their desks at work, and now it is impossible to keep real life from showing up on a Zoom screen,” Martin said.

The Centers for Disease Control and Prevention points out that two out of every three caregivers are women who support not only children but also adults with chronic illness, and women caregivers are at risk for poor physical and mental health.