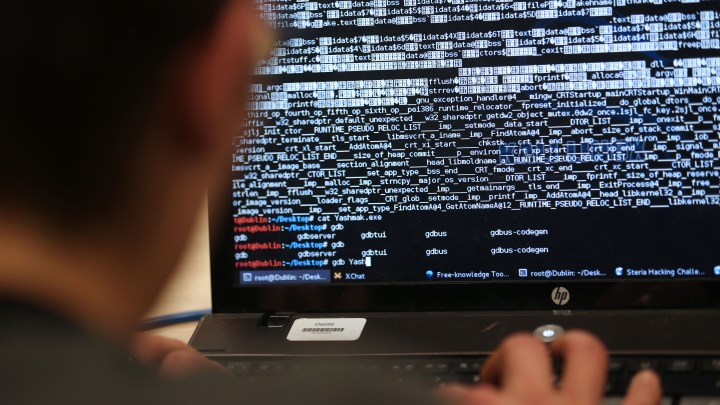 COPY
Some hackers view themselves as Robin Hood, stealing from the rich and giving to the poor, one expert said. Thomas Samson/AFP via Getty Images

Some hackers view themselves as Robin Hood, stealing from the rich and giving to the poor, one expert said. Thomas Samson/AFP via Getty Images
Listen Now

As global cyber ransomware attacks increase, one group of hackers is raising eyebrows by donating a small portion of its earnings to charity. Or, at the very least, attempting to.

About a month ago, cybersecurity consultant Brett Callow at the firm Emsisoft emailed me a screenshot from the dark web.

It showed the hacker group Darkside posting receipts of $10,000 donations to charities — one for children, the other clean water.

To be clear, Darkside is a criminal outfit, one that hacks into company computers, locks up critical data and leaks it online as it demands ransom from its victims.

But it’s one of several trying to brand itself as ethical, odd as that may sound. A similar group, which has not been named publicly, recently hacked into a company in Germany but quickly reversed course on apparent ethical grounds, investigators say.

“The ransomware group responsible supplied the decryption key as soon as they were told they’d hit a hospital,” Callow said.

Of course, bad people do seemingly good deeds in the offline world, too.

This newsreel shows men coming out of a Depression-era soup kitchen in Chicago, funded by the mobster Al Capone.

“I appreciate the soup on a Sunday on a cold day,” one man says in the video. “Soup is very hot.”

“Look what Capone is doing for these guys,” another says.

In Japan, organized crime groups provided early relief following the deadly tsunami in 2011 and earthquake in 2005. And right now, Italian crime syndicates are believed to be providing pandemic aid.

“There already have been reports from Europol which says the Mafia in Italy at the moment is distributing money, supporting the population through the lockdowns,” Giovanni Travaglino, lecturer of psychology at the University of Kent, said. “They ensure that everybody can eat.”

Travaglino said this kind of apparent generosity serves the criminal enterprise by buying off local communities.

“The Mafia, they function around a rule which in Southern Italy is known as ‘omerta’, which means the rule of silence,” Travaglino said. “You never report to the police what they do, for example. You never denounce them. And that’s really important for them to operate, because they need that kind of level of public support.”

To gain this support, some cyber groups go to great lengths to appear customer friendly while committing their crimes. It’s not unlike that scene from the 1991 film “L.A. Story,” when the two main characters are chit-chatting when a pleasant man with a gun approaches.

Actor Steve Martin’s character replies: “Hi, how are you?” as he hands over the money.

“Thank you very much, ” the robber says, walking away to allow the characters to continue their conversation without missing a beat.

Cybersecurity consultant Callow, at Emsisoft, said hackers will act nice and professional on the assumption that their victims will similarly fork over the money.

“They have guaranteed response times, their service is speedy and polite,” Callow said. “Their decryption tools come with a guarantee that they will work.”

Alana Maurushat, professor of cybersecurity at Western Sydney University, has interviewed many in the course of her research.

“When we were doing some interviews with people in Eastern Europe and in Russia,” Maurushat said, “the people in question perceived themselves to be like Robin Hood, stealing from the rich to give to the poor.”

It’s a way for crooks to appease their consciences, she said, adding that some in fact clean up and organize victims’ files — as they rip them off.

To be clear, many are not buying this notion of altruism. One nonprofit that the Darkside hackers donated to — Children International — said it has “no intention of keeping” the money.