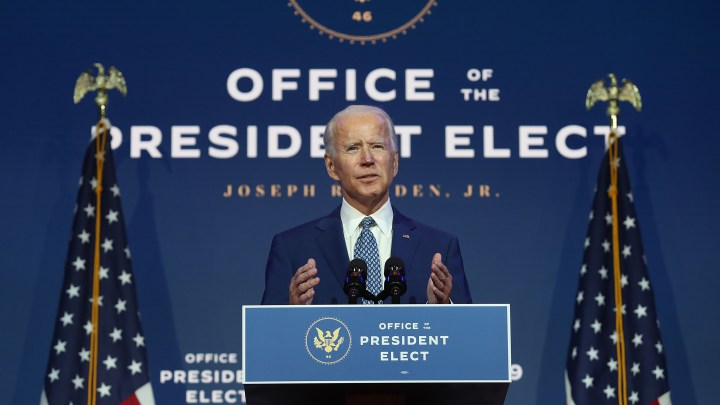 In the days after a U.S. presidential election, an unofficial race develops in the outside world. Political leaders around the globe vie with each other to see who will be the first to get a call from the president-elect.

The winner of that race in Europe is a surprise: Boris Johnson. The fact that the British prime minister was the first European leader to be favored with a call from Joe Biden was unexpected, since Biden and Johnson are not what you’d call soul mates. In fact, the U.S. leader once described Johnson as “a physical and emotional clone of Donald Trump,” and he has made clear that he is not a fan of Johnson’s main political project, Britain’s departure from the European Union.

So what could Biden’s phone call mean? Is Johnson’s dream of a U.S.-U.K. free trade deal — now that Britain has left the EU — about to come true?

“I think it’s less likely than with Trump in power,” said professor Alan Winters, founding director of the UK Trade Policy Observatory at the University of Sussex.

“Trump and Boris Johnson were very keen to reach an agreement, and I think they would have tried very hard for the sake of having a political triumph,” he said.

Johnson is eager to show that Britain’s new-found ability to strike its own trade deals after Brexit is beginning to pay off, and Trump, ever hostile to the EU, was happy to support the breakaway country.

But the president-elect’s priorities will be the polar opposite.

“I think it’s very likely that a U.S.-EU agreement will precede a U.K.-U.S. agreement,” said Allyson Stewart-Allen, CEO of International Marketing Partners and author of a new book, “Working With Americans.”

Stewart-Allen argues that Biden wants to repair what he sees as the damage done to U.S.-EU relations over the past four years. And economically it makes far more sense to pursue a deal with the 27-nation bloc before one with Britain.

However, Biden can hardly forget that when he was vice president under President Barack Obama, the U.S. pursued the Transatlantic Trade and Investment Partnership talks with the EU, and those talks foundered over European concerns about U.S. food safety standards. Stewart-Allen admits that any fresh talks between Washington and Brussels will not be easy.

“The concern about chlorinated chicken and hormone-treated beef hasn’t gone away,” she said.

But Britain may face a much harder task extracting a trade deal from the next president. Biden’s Irish ancestry could represent another hurdle. He and many other Democratic politicians have condemned Johnson’s plan to tear up part of its EU withdrawal agreement, the bit that seeks to avoid a hard border between the British province of Northern Ireland and the Irish Republic. Biden fears that would undermine the U.S.-brokered Good Friday agreement that brought peace to Northern Ireland more than 20 years ago.  In an interview with the BBC, Kim Darroch, a former British ambassador to the U.S., struck a warning note.

“If we try to unilaterally rewrite the withdrawal agreement, then I think honestly there is no chance of a U.S.-U.K. free trade deal,” Darroch said.

Brexiteers are furious. Many of them believe that Britain was unfairly bounced into the withdrawal agreement, and the effect of it, if Britain does not secure a free trade deal with the EU, will be to impose a hard border between Northern Ireland and the rest of the United Kingdom. They say that would be against the wishes of the majority in the province who want to remain British and would itself violate the Good Friday Agreement and threaten peace in the province.

John Longworth, a former member of the European Parliament for the Brexit Party and head of The Independent Business Network, said that morally, Britain is no longer bound by the withdrawal agreement.

“The withdrawal agreement really is  null and void because the EU has acted in bad faith. And I think Biden is completely misunderstanding this,” he said.

Longworth argues that the EU has shown its bad faith by, among other things, demanding its regulatory control continue over Britain after Brexit. As for the possibility of a U.S.-U.K. trade deal, Longworth is urging the president-elect to focus on the economic benefits for both countries.

Exports and imports of goods between the two nations are worth $130   billion a year. But that’s just 20% of America’s trade with the EU. And, here’s the bottom line: As president, Biden may have rather too much on his plate in the short-term worrying about COVID-19 and the economic recovery to think about a trade deal with Britain.