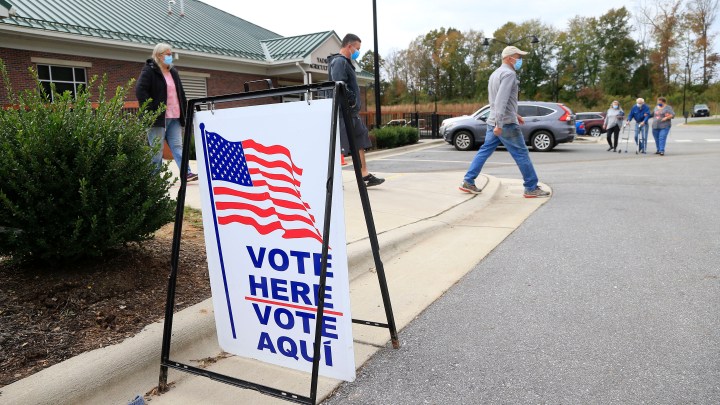 COPY
"Today, we simply don't have technology that allows us to gain any meaningful assurance that all of those phones and computers are operating without malware, without tampering," says Dan Wallach, computer science professor at Rice University. Brian Blanco/Getty Images
Business of Voting

"Today, we simply don't have technology that allows us to gain any meaningful assurance that all of those phones and computers are operating without malware, without tampering," says Dan Wallach, computer science professor at Rice University. Brian Blanco/Getty Images
Listen Now

We shop online, we bank online and, since the COVID pandemic began, many of us have learned to do any number of other things online. So why aren’t we voting online?

“Voting over the internet creates a number of challenges that we don’t actually know how to solve yet,” Dan Wallach, computer science professor at Rice University, told “Marketplace Morning Report” host David Brancaccio.

Wallach, who is also a member of the U.S. Election Assistance Commission’s Technical Guidelines Development Committee, noted that our inability to completely stop malware tampering, prevent external hacking attempts or make sure every voter has an internet connection makes the prospect of online voting too complicated to implement.

Below is an edited transcript of Brancaccio’s interview with Wallach on what unique challenges face computer scientists and election officials if they wish to one day make online voting a reality.

David Brancaccio: You know, pandemic — we learned how to do just about everything from home. Why is it that we don’t vote from the comfort of our living room?

Keeping your vote private and secure

Brancaccio: Because we want to cast the vote, we want to press that button and know that our preferences are recorded. But to really be sure that they got it right raises the technological danger that my voting choice could be revealed to the world.

Wallach: Exactly. Consider when you do online banking. Things can and do go wrong all the time. About once a year, my credit card number somehow manages to leak, and then I have to change my credit card, dispute a couple charges and that’s a process that we all are familiar with. Now, imagine if the same exact thing happened with our online voting system. Because our votes are private and anonymous, that means that, were they to be tampered with, we wouldn’t be able to detect that. And we wouldn’t know that we had to take some kind of corrective action.

Brancaccio: That’s right, you know, you would press the button but it would go from your point of view into a void, and it’s hard to audit whether or not, you know, my particular vote was recorded correctly.

Wallach: Exactly. The ability to vote online depends on a number of these properties, like your vote has to be private, which means you can’t get any sort of receipt that might allow you to, for example, be bribed or coerced into voting against your normal preferences. At the same time, you want to check that your vote was recorded correctly, that it hadn’t been tampered with in transit. These two desires are fundamentally at odds with one another.

The push back to paper ballots

Brancaccio: And it’s one of the reasons for this, you know, broad irony that in the last 20 years, the push has been to actually bring paper back to the process when you’re casting a vote.

Wallach: Paper is a really fantastic technology. The thing that’s great about paper is that once something is either written on paper or printed by a computer on paper, at that point, it’s out of the reach of malware on computers. Paper is indelible, it’s unchangeable. And what that means is if the tabulation is somehow manipulated or tampered or damaged or destroyed, then we have this paper surviving the process that can be audited, that can be recounted, that gives us a high degree of assurance that we have the correct winner of the election.

Brancaccio: Back to online voting, we can solve so many things — maybe we’ll even have a bunch of vaccines here in a matter of weeks or months, in a very short time frame. We can’t solve this, voting remotely?

Wallach: I think that making voting work remotely is one of these seductive problems that on its surface seems very straightforward. We can bank online, why can’t we vote online? And the answer is, it’s easy to build a system that looks like a voting system and accepts your votes and adds them up. But it’s really hard to build security into that system that can face the adversaries that our voting systems face. Before 2016, if I told you that we need to engineer our nation’s election systems to be robust against overseas adversaries trying to tamper with them, you would have said that’s not realistic. That’s crazy. Today, we know that that’s absolutely part of the threat. But other countries are actively working to manipulate our election outcome. And that means that our voting systems have to be robust in the face of sophisticated nation-state adversaries. That creates a very high bar to engineering such a system. And I see a number of open research problems in between here and making such a thing available for all Americans to cast their votes.

A timeline for moving to online voting

Brancaccio: You think you’ll see it in your lifetime? I don’t how old you are — maybe our lifetime? You and me?

Wallach: I’m 49. I think that sometime between now and, you know, my long and healthy, prosperous life, we might see some sort of internet voting. But we’re going to need to solve several problems that today are considered open research challenges. Just to pick one example, we need to be able to have an election official, receiving connections from millions of computers across all of their voters. be able to convince themselves that all of those voters’ computers or phones are operating correctly, that they haven’t been tampered with. Today, we simply don’t have technology that allows us to gain any meaningful assurance that all of those phones and computers are operating without malware, without tampering.

Brancaccio: I just had a flashback to the Iowa caucuses, which was a much simpler technical problem, yet the system was not up to the challenge, if you remember, last spring.

Wallach: Yeah, I don’t exactly understand what went wrong in Iowa, but they don’t exactly understand either. Clearly, something technically went wrong. And this actually brings up an interesting point: One of the easiest things for an attacker to do is not to subtly manipulate the votes, it’s just to knock the whole system offline. This is a class of attack that security people call a denial of service attack — that you can simply overwhelm a computer with requests, and then it stops working. This is the easiest possible thing for an overseas adversary to do to our systems. And it’s the hardest thing for us to defend against. The internet today is not really engineered around defending against this class of attacks.

Brancaccio: But there’s pressure to make this more accessible. I mean, I’m thinking about people with disabilities who want to register their vote.

Wallach: Right, for people with disabilities that make it difficult or impossible for them to go vote in person, online voting is a very seductive solution. The best solution that we have today is what is sometimes called accessible vote by mail. The way that typically works is that there is a website that assists you in filling out your ballot, and screen readers and other assistive technologies can interact with that website, like they interact with any other website. But at the end, it prints a paper ballot that you put in the mail and send through the mail. So that kind of a hybrid — an online system to help you prepare your ballot but a paper printout envelope to send it back — that’s the best technology we have today to support accessible voting from home.

Brancaccio: And I suppose a similar logic might apply to people in the military serving overseas or State Department people serving overseas, where you’d want to have some reliable system there to get their vote tallied.

Wallach: Exactly. And so for overseas and military voters, what is commonly offered for them is the ability to get your blank ballot online, just a PDF that you can print locally. You fill it out, you mail it back. And so that avoids a round trip for a paper ballot to be mailed to them and returned, you only need one direction of paper mail.

Brancaccio: I see. You just have to be sure that there’s like not duplicates, and so forth, I suppose, in that situation?

Dan Wallach: Well, in any vote-by-mail situation, there is typically some sort of outer envelope and inner envelope, and the details vary by state. But the broad idea is that your real ballot is inside of an inner envelope and then written on that is, “Hi, my name is, and here’s my precinct and here’s why I should be voting, and I’m going to sign this thing.” And then that is adjudicated when the ballot arrives, just like any other vote-by-mail ballot.