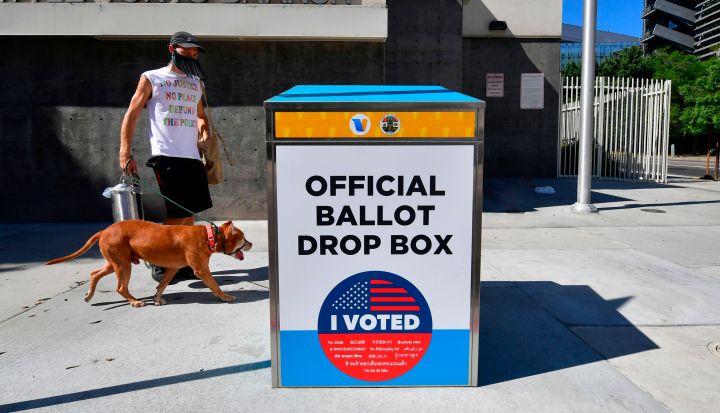 COPY
One bookmaker estimates bets placed in 2020 are more than double what was spent in 2016. Frederic J. Brown/AFP via Getty Images
Business of Voting

One bookmaker estimates bets placed in 2020 are more than double what was spent in 2016. Frederic J. Brown/AFP via Getty Images
Listen Now

Election Day is just four days away, and as Americans head to the polls, people in other parts of the world are placing bets on who they think is likely to win the White House. While election betting is illegal in the U.S., it’s not in the U.K., where the sector has seen a growth in demand. In fact, their staples of horse racing and football have been overtaken in popularity by betting on politics.

Joe Lee, head of political betting at Paddy Power, one of the biggest bookmakers in the U.K. and Ireland, spoke to the BBC’s Victoria Craig on the global edition of the “Marketplace Morning Report.” Below is an edited version of their conversation.

Joe Lee: It’s safe to say that there’s only one candidate that people are interested in, and that’s Donald Trump. So, approximately 8 out of every 10 bets we’ve taken in the last two months have been on Donald Trump. Four years ago, Donald Trump obviously knocked over Hillary Clinton in the U.S. election, and people are remembering that, they’re remembering the payouts that they had and they’re happy to go again.

Victoria Craig: So how accurate of an indicator is betting if we compare it to the outcomes of other elections here in the U.K., for example? Is it more reliable than polling is?

Lee: In 2016, you had Donald Trump in the U.S. election, you had Brexit and then you had the [turnout] for Theresa May in the U.K. general election that she called. And essentially, they were three high-profile scenarios, that kind of all went against the polls. If you looked at the 650 constituencies in the U.K. general election and polled those, in all likelihood, about 90% plus of those would be polled correctly. We just got outliers, but very high-profile outliers that kind of shaped people’s opinion of the difficulty with polls.

Craig: And it’s not just who’s going to win the White House this year. What are some of the most popular bets that people have been placing so far?

Lee: A lot of interest in in the various states. So Florida currently now has swung back in favor of Donald Trump. And I think there’s some indications coming out of Florida that, given the pandemic, a lot of people have shifted towards the postal absentee ballot route, and the numbers coming out of Florida are indicating that the Democrats aren’t quite as far ahead of the Republicans. And, obviously, the Republicans are going to I’d suggest win on-the-day, in-person voting quite significantly.