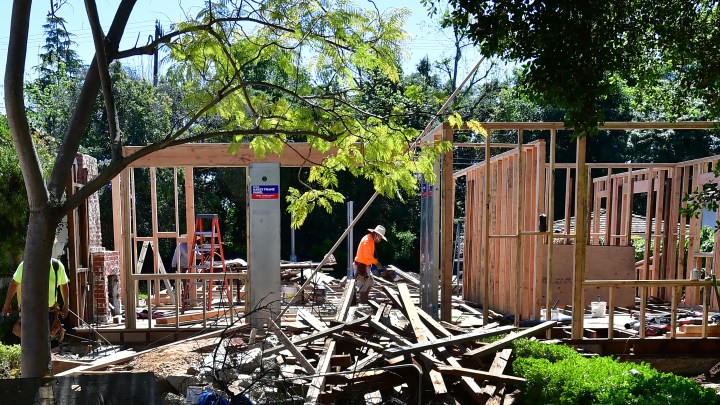 COPY
A construction worker walks through the site of a new house being built in San Marino, California. Housing starts in September were up 11% from last year. Frederic J. Brown/AFP via Getty Images

A construction worker walks through the site of a new house being built in San Marino, California. Housing starts in September were up 11% from last year. Frederic J. Brown/AFP via Getty Images
Listen Now

Housing — and all of the spending related to housing — make up in the neighborhood of 15% of this economy, according to the National Association of Home Builders. So it’s no small thing that the housing market continues to be one of the only bright spots in that economy.

The Commerce Department said Tuesday that groundbreaking on new homes continues to grow, up 11% last month from a year ago, pending the inevitable revision. But while the monthly numbers bounce around a lot, the overall trend is up. It’s all about low interest rates, which have made borrowing to buy a home cheaper than it’s ever been — at least if you can get those record-low rates.

It can take some doing, because given the same set of facts, different lenders come up with different deals. Say you want to refinance your house and are looking for a 30-year fixed-rate mortgage. A search using an online aggregator, which pulls together a bunch of different loan offers, may spit out a loan with a 2.5% interest rate, but $3,500 in fees. Another offer might come with a higher rate of 3.62%, but with zero fees.

What’s behind the wild variations?

“Particularly this year, with a lot of volatility in financial markets, a lot of different lenders are facing different economic circumstances, we’ve seen the variation in rates in our survey actually widen quite a lot,” said Len Kiefer, deputy chief economist at Freddie Mac, which calculates the average rate for a 30-year mortgage at 2.81%, with a 0.6% fee.

Some of those circumstances include a lender’s own borrowing costs, or how efficient the company’s technology is, or how many employees it has.

Another factor, said Tendayi Kapfidze, chief economist at LendingTree, may be “if a lender has a big office in an expensive neighborhood, they’re going to have to cover that cost with the profits from the mortgages.”

But lenders aren’t going to let you in on all that. They may still offer you a low rate, but tack on a lot of fees.

This is one of those times when it really does pay to shop around, said Bankrate chief financial analyst Greg McBride.

That time invested, he said, “generates a great return on investment, when you’re able to shave a quarter or half a percentage point off of the loan rate you otherwise would have gotten.”

And getting the best rate may mean you actually have to pick up the phone.