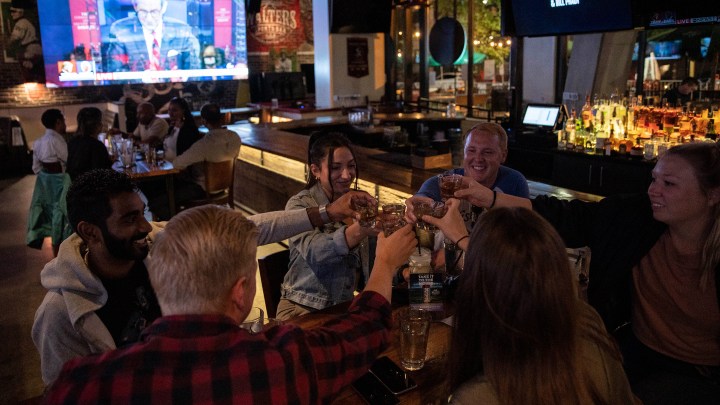 COPY
A group of people takes shots before they watch the first presidential debate at a sports bar on Sept. 29 in Washington, D.C. Sarah Silbiger/Getty Images
COVID-19

A group of people takes shots before they watch the first presidential debate at a sports bar on Sept. 29 in Washington, D.C. Sarah Silbiger/Getty Images
Listen Now

“There’s no rhyme or reason,” said Kelly Spaulding, her patience wearing thin. Spaulding owns Catmando’s, a bar in Escanaba, Michigan. Any business in Michigan that makes more than 70% of its money from alcohol has been shut down since July. Spaulding had been open for a month up until then.

“Like what makes the difference if you serve alcohol or if you serve food? So now the restaurants are completely packed, you can barely find a parking spot, there’s a 30 to 40 minute wait,” she said.

In Michigan, like in many places around the country, the rules for reopening have been different for bars versus restaurants. Michigan shut down alcohol-dependent businesses after an outbreak in June at a Lansing nightclub with a packed dancefloor. But Spaulding said her bar is not a nightclub, and she’s reaching the end of her rope.

The differential treatment is widespread. In New York, only bars that serve food outside are allowed to be open. In North Carolina, independent bars are not allowed to open at all. In Texas, businesses that make more than 51% of revenue from alcohol must remain closed. In Chicago, prior to Sept. 28, bars had to close unless they served food. They can now operate at 25% capacity, compared to 40% for restaurants.

Public health departments have been suspicious of bars and the behavior of their patrons.

“[Bars] are higher risk broadly from a COVID perspective,” said Dr. Allison Arwady, commissioner of the Chicago Department of Public Health. “As people are drinking more, we sometimes see people lose some of the inhibitions — social distancing, etc.,” she said.

Until recently, Chicago closed bars that don’t serve food; New York still has a similar rule. The food requirement is an effort to slow down drinkers’ buzz and prevent inhibitions from slipping so quickly and so far. Bars are loud, people don’t wear masks while drinking, and speaking at elevated volume may pose a transmission risk as well, Arwady said.

The differential treatment of bars has been intentional, with one age group in mind, she said.

“I mean, it’s not a surprise, but in some of the efforts to make sure that group in particular is doing the things we need everyone to do, it’s one of the reasons we’ve had some stricter requirements around bars,” Arwady said, adding that she feels bars have, by and large, been doing a good job.

Some bars have been able to adapt to restrictions by partnering with neighboring restaurants to serve food with drinks. That option has not been available to Zack Medford, who owns three bars in Raleigh, North Carolina, where independent bars have been closed with no exceptions.

“There’s a misconception that all private bars are tight spaces with packed dance floors and people breathing all over each other,” he said. “But in reality, most bars these days are more like ‘Cheers’ than they are like Studio 54,” he said.

Medford is also president of the North Carolina Bar and Tavern Association.

“The restaurants are open, and our customers walk right by our closed doors into the restaurant-bar next door that’s a much smaller, much more cramped space,” he said. “The only reason they’re allowed to operate is ’cause they serve food.”

Many bar owners across the country, sensing the demise of swathes of their industry, have emphasized their cultural role. Michael Klein, president of the Texas Bar and Nightclub Alliance in San Antonio, points out “there are countless famous musicians that got their start playing happy hour on a bar on Sixth Street.” Klein’s group is suing Texas’ governor over bar closures.

In New York, two blocks from Studio 54 — which is now a theater — Richard Schaeffer stood between two gay bars, both closed, one for good.

“There’s definitely a loss of our culture and what we do,” he said. In New York, only bars that serve food and do so outside have been allowed to open. It’s meant that many gay bars remain closed, some permanently.  Schaeffer used to perform at some of the now-defunct bars and remembers the days when drag queens could hold court before hundreds of fans or groups would gather to watch “RuPaul’s Drag Race.”

“I’m a sober queer person, and I still go to the bars to be around my people. We are, as queer people, limited to the amount of spaces that we actually have that are designated queer safe spaces for us — just a place we can personally go and not feel judged in that sense, you know,” he said.

According to Yelp, 59 gay bars on the platform are closed nationwide; more than half of them have gone out of business.

Increasingly, bar owners and organizations representing them have expressed a growing sense of desperation.

“This industry is so scarred and so beat up that they’re willing to do anything and everything,” said Scott Ellis, a distillery owner who runs the Michigan Licensed Beverage Association. He’s referring to operating at reduced capacity, enforcing spacing between customers and other restrictions that would permit some level of business.

The bar and nightclub industry once took in $24 billion a year in revenue, according to Ibisworld. Now, Yelp says bars and nightlife establishments have endured an especially high rate of closure. Of the 6,451 that were closed on its platform as of August, 54% were closed permanently.